RUC water cannon used during the Troubles sold in England for $4,000

The Royal Ulster Constabulary used water cannons to disperse violent rioters in the early days of the Troubles. 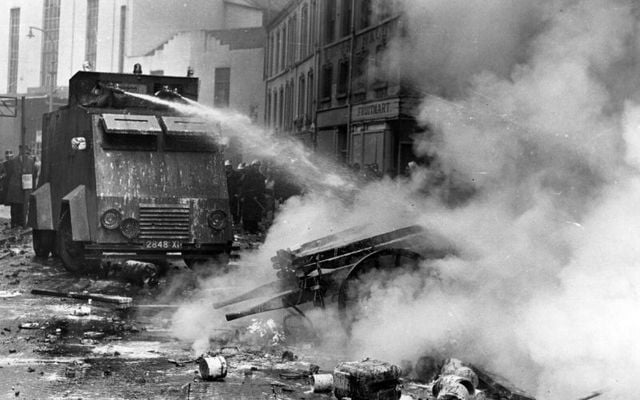 An RUC water cannon in action during the Bogside riots of the 1960s. Getty

A historic Royal Ulster Constabulary (RUC) water cannon used to control rioters during the Troubles in Northern Ireland has been sold for £3,100 ($4,300).

The 26-tonne RUC truck mounted with a 1970 Foden Pyrene water cannon was used in the 1970s to disperse crowds and is thought to be the only known example of its kind still in existence.

The historic truck spent more than 20 years outside at a museum in Humberside in the United Kingdom and requires restoration.

Military equipment specialists Allsops of Bolton bought the RUC truck from the Humberside museum on impulse and attracted significant interest when they put it up for sale.

The vehicle was subject to 12 bids on Ebay before it was eventually sold for £3,100.

Jonathan Allsop told the Daily Mail that the water cannon had "restoration potential".

"It has restoration potential and, to be quite honest, it should be restored," he said.

Allsop's Lancashire-based company restores old military equipment - particularly from the Second World War - and he told the Daily Mail that he decided to purchase the RUC vehicle when the company was purchasing other military equipment at an auction.

"We were buying other stuff at auction and we have the equipment to move it," he told the Daily Mail. "It was an impulse purchase."

He said that he didn't have enough time to restore the vehicle, prompting him to put it up for sale.

The RUC frequently used water cannons to disperse crowds during the Troubles but discontinued the practice in the 1980s and 1990s.

Police in Northern Ireland also used water cannons during a violent Orange Order parade in the Ardoyne area of North Belfast in July 2013.