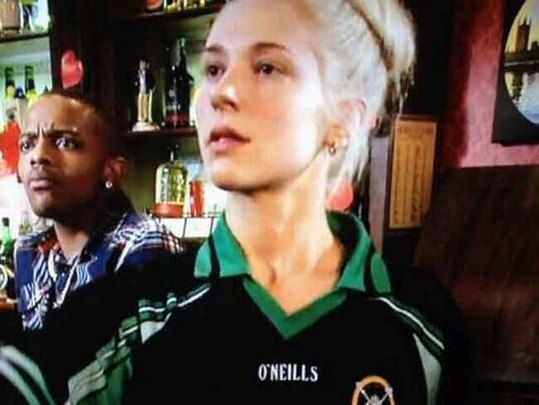 The BBC has been slammed by a top unionist for allowing a character to wear a GAA Irish football jersey on the top rated show “Eastenders.”

Loyalist campaigner Willie Frazer told the Daily Mirror “this has to stop” as “there are elements in society who support GAA who also support republican violence and IRA terrorism.”

The jersey of a local team in Antrim was worn by actress Maddy Hill in a scene in O’Neill’s Bar on the set. The ONeill’s crest is clearly visible.

Frazer stated, “The GAA still has a long way to go before all their players and supporters stand up against the IRA and their evil activities.

“And until that happens BBC cannot be seen to be openly supporting the GAA in this manner.

“When clubs and club grounds, medals and cups continue to be named after so-called fallen martyrs of the republican movement, there can be no room for the GAA to be associated with TV entertainment on programs like 'EastEnders.'”

Sinn Fein's Paul Maskey said the comments were “disgusting and dangerous” and demanded he apologize to the GAA and St Patrick’s College, Ballymena – the school represented on the shirt.

He added, “The GAA have a long history as a force for good.

“Every club in the land caters for all ages and all backgrounds, everyone is welcome and the clubs also work to ensure young people who may have got caught up in trouble find a way out of it through sport and discipline.

“What Willie Frazer has said is disgusting and dangerous, people will be very offended by this and he needs to wind his neck in.

“He is a divisive element in our community and all he is doing is damage.

“Insulting the GAA, insulting an actress for wearing a school sports shirt, and a very nice one at that, insulting St Pat’s College, Ballymena, insulting the Irish people, will do no good. All it does is show up Willie Frazer for who he really is.”

Frazer said, “I’ve no problem with the GAA as a sport and the majority of people involved in it are decent, ordinary folk.

“But there are those who continue to capitalize on their version of romantic notion of fighting for Irish liberty and the GAA has fallen foul of their attention.

“The next thing, the Queen Vic will be renamed after Bobby Sands and the jukebox will play Irish rebel songs.

“We are talking about a fictional program here, but this is a serious matter. I have demanded that the BBC launches an internal investigation into how and why this shirt was used in the programme.

“The wardrobe manager will have had to OK this outfit. Someone will have to have had to get their hands on this shirt and I want to know what their reason behind the choice was.

“If the actress herself made the decision to wear it, then that needs questioned too.

“What is the message it sends out? The answer is clearly there is republican sympathy afoot and in my opinion, something much more sinister. I see this as the promotion of terror on TV entertainment and it has to stop.”