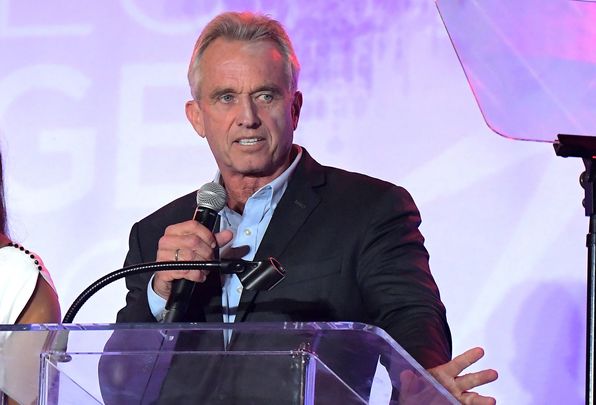 Kennedy Jr., the son of Robert F. Kennedy and the nephew of John F. Kennedy, penned an op-ed for anti-vaccine organization Children's Health Defense on Tuesday.

He repeated claims that Bill Gates controlled the WHO, labeling it a marketing arm for Gates's vaccine empire. He alleged that Gates forced the WHO to declare vaccine hesitancy a top global health threat and said that Gates used his influence as the largest donor to the WHO to do so.

Kennedy Jr., a prominent anti-vaccine advocate, said that Gates was trying to shape the narrative around vaccinations by pumping money into fact-checking websites to mislead the public.

He said that social media sites like Facebook and Pinterest were using advice from the WHO and the CDC to say which online statements are misinformation or hoaxes and said that Bill Gates was responsible for this since he donates so much money to both organizations.

Kennedy Jr. doubled down on claims that Bill Gates "owns" the WHO. He previously claimed that Gates provides 10% of the WHO's funding and that the organizations "begs and rolls over" for Gates's money.

The social media giants want people to get scientific evidence from trusted sources like the WHO and the CDC rather than conspiracy sites and pages that deliberately spread misinformation.

Facebook made the decision to fact check anti-vaccination posts after groups like the American Academy of Pediatrics called on social media sites to limit the spread of misinformation about vaccines on their sites.

Facebook uses online fact-checker Politifact to censor vaccine misinformation and Kennedy Jr. believes that Gates is manipulating what is censored.

He also claimed that Gates's donations to public media organizations like National Public Radio (NPR) and PBS buys favorable coverage for vaccines in the mainstream media.

Bill Gates has been the subject of a huge number of allegations and conspiracy theories throughout the COVID-19 pandemic, many of which have come from Robert Kennedy Jr.

Those claims have been debunked and there is no evidence that Gates stands to profit from the manufacture of a vaccine.

The claims were spread far and wide by anti-vaccination propaganda groups.

Kennedy Jr. also claimed that Gates would use a coronavirus vaccine to install a microchip in people which could store a person's medical history and even keep a record of any criminal activities they had been charged with.

The claim was quickly debunked by Reuters, who clarified the matter with the Gates Foundation.

Gates has donated more than $300 million to develop a coronavirus vaccine and he is working with world leaders and scientists to do so.

The Gates Foundation has also launched a Global Vaccine Action Plan, which aims to provide vaccines for people in some of the most vulnerable communities in the world.