Jo Berry, a woman whose father was killed in attack, and Pat Magee share incredible story of reconciliation. 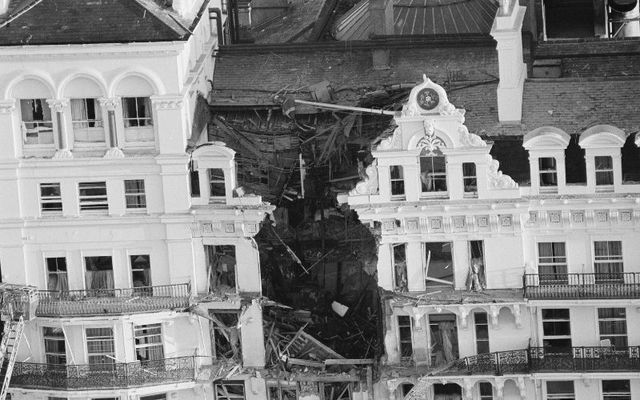 The Grand Hotel, in Brighton, following the 1984 bombing: Jo Berry, a woman whose father was killed in attack, and Pat Magee share incredible story of reconciliation. Getty

A woman whose father was killed in the 1984 Brighton bombing has shared her remarkable story of reconciliation with the man responsible for the attack in an Irish radio interview.

The IRA attack, which targeted the British government’s cabinet, including Prime Minister Margaret Thatcher, claimed the lives of five people and injured 31 on this day, Oct. 12, 1984.

Jo Berry, whose father was a Tory MP killed in the bombing, now travels to conflict zones with Pat Magee, the man who planted the explosive, to share their story, TheJournal.ie reports.

On RTÉ Radio 1′s "Sunday with Miriam" in Januray 2015, Berry spoke about meeting Magee for the first time.

“I was so curious. I remember looking at you, Pat, and thinking ‘you planted the bomb that killed my Dad, but who are you? Who are you other than that?’” she said.

Berry said during the first meeting, Magee focused on the political justification behind the attack, before eventually seeing the lasting effect it had on her.

“The conversation was very different after that,” she continued, “I’d no idea that we’d still be meeting together all these years later.”

“It was the beginning of Pat seeing my Dad as a human being … I thanked Pat and he said ‘I’m really sorry I killed your father’ – and it was said with a lot of feeling."

Magee said he carries a "heavy burden" from the bombing.

“I do regret the loss of life and all those injured. And how could you not regret somebody spending the rest of their life in a wheelchair because of your actions?” he said, referring to the injuries suffered by the wife of cabinet minister Norman Tebbit.

Tebbit reiterated his refusal to forgive Magee earlier this year.

“I went along wearing the political hat – the political obligation to explain,” he said, “but then in the presence of a person you’ve really hurt and that person listening to me, sharing things about her father … I suddenly began to get an impression of this guy I had killed whereas before none of that had existed.

“He was just this cipher, the Tory, the enemy, and I’m seeing this very smart, very good woman – and a lot of the goodness I perceived in her must have come from her father, and I killed this guy."