The Brown Booby passed away peacefully on Thursday night. 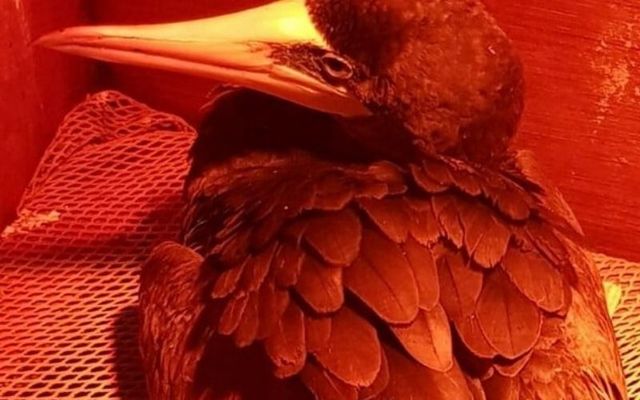 The Brown Booby is thought to be the first bird of its kind to ever land in Ireland. Kildare Animal Foundation Wildlife Unit Facebook

A rare tropical seabird has died four days after it was first spotted on a beach in County Wicklow.

The Brown Booby, believed to be the first bird of its kind to ever land in Ireland, died on Thursday night after spending four days in intensive care at the Kildare Animal Foundation Wildlife Unit.

The bird was first spotted on Greystones Beach on Monday afternoon, where it was very thin, weak and suffering from exhaustion.

The Brown Booby is traditionally found in the West Indies and the Cape Verde Islands and it is believed that this bird was blown off course during a storm.

The Kildare Animal Foundation posted on Facebook on Saturday evening to confirm that the bird had "passed away peacefully" after its condition deteriorated.

The post said that the Brown Booby had lost one-third of its body weight on the journey to Ireland and that it struggled to survive in Ireland's cooler climate.

The foundation additionally noted that the bird was likely suffering from an underlying health condition that caused it to become ill in the first place.

"We are saddened by the loss of this bird but grateful and overwhelmed by how people came together to help this rare visitor to our shores. Despite the outcome, it gave everyone some well-needed distraction and focus during these challenging days," the post said.

The Foundation said earlier in the week that it was "cautiously optimistic" that the bird would recover after it gained back some weight, however, its condition quickly deteriorated again.

The remains of the bird will be given to the National Parks and Wildlife Service to be considered for scientific research, the post confirmed.