After a hiatus lasting some months, Russian bombers were today flying off the west coast of Ireland. 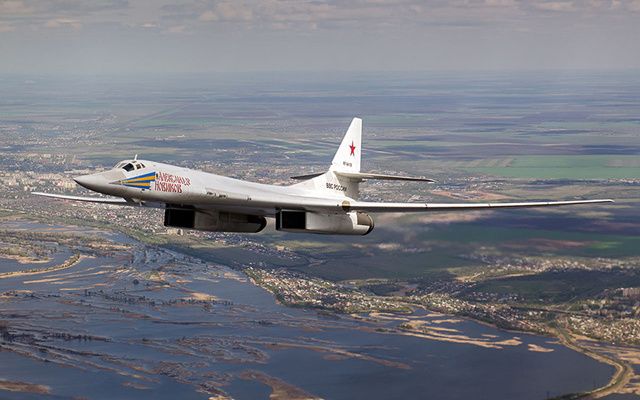 A Tu-160 “Blackjack” - After a hiatus lasting some months, Russian bombers were today flying off the west coast of Ireland. WikiCommons

After a hiatus lasting some months, Russian bombers were today flying off the west coast of Ireland - presumably not admiring the scenic delights of the “Wild Atlantic Way.”

The Irish Independent reported that British Royal Air Force jets had been scrambled to intercept the planes as they neared both British and Irish airspace.

The paper was reporting that the TU-160 "Blackjack" bombers entered the UK's “area of interest” – as opposed to sovereign airspace - from the north-east, flying between the Shetland and Faroe islands, then flew down the west coast of Ireland and over the Bay of Biscay.

"There was no safety impact to civilian traffic operating in Irish controlled airspace."

An RAF spokesman said: "We can confirm that quick reaction alert Typhoon aircraft from RAF Lossiemouth and RAF Coningsby scrambled to monitor two Blackjack bombers while they were in the UK area of interest.

"At no point did the Russian aircraft enter UK territorial airspace."

Such wording became almost routine about a year ago when Russian bomber flights – at that time carried out by TU-95 “Bears” - were especially frequent.

Despite the official statements, the Russian flights, which are unannounced, do have the potential of causing a hazard to civil aviation.

On one day in January of last year, the RAF scrambled after a pair of Russian TU-95 “Bears” had raised the trip around the bay concept to a new level.

They appeared on British radars as they flew in an arc that took them on a flight path off Ireland’s west coast.

Subsequent reports stated that their transponders were switched off.

In contrast to civilian airliners, the Russians were not making it easy for other aircraft in the vicinity to be aware of their presence.

The RAF knew and duly sent up its Typhoon interceptors.

The bears looped around Ireland’s south coast and headed for the English Channel with the British fighters as close company.

Nobody panicked or fired a shot. Nobody was hurt, though Irish pride was somewhat dented.

The Bears had not penetrated sovereign airspace, but they had crossed through the Irish-controlled airspace, a much larger area in which civil aviation is the responsibility of the Republic’s air traffic control system.

He also called for a probe into reports that the British military authorities had not informed Irish civil aviation authorities that they had unleashed their Typhoons into air space under Irish control.

As far as Dooley was concerned, there was little to choose between Russian bombers and British fighters.

Ireland’s location, he said, meant that the Republic has some of the busiest airspace in Europe to look after with almost all transatlantic flights passing overhead.

The Russian and British unauthorized entry into Irish airspace had posed a threat, not only to Irish air passengers but to thousands of people flying from Europe to the United States.

“These maneuvers,” he said, “were not sanctioned by the Irish Aviation Authority and had put Irish air traffic controllers in the invidious position of not being able to carry out their duties effectively. This should not be tolerated.”

Dooley’s anger with the Russians had merit, and it was widely shared.

His anger over the British reaction was not likely to provoke as much sympathy.

That is because his own party, during a period when it was in government, let slip that the Republic of Ireland was, de facto, under the protective wing of the Royal Air Force when it came to the defense of Irish skies.

This came to light after 9/11 when then Fianna Fáil defense minister, Michael Smith, let slip in the Dáil that the RAF would come to Ireland’s aid if there was a 9/11-like incident over Ireland.

RAF cover is required because the Irish Army Air Corps lacks the kind of aircraft with the speed and altitude capability required to intercept Russian bombers.

That the Republic feels it can rely on the RAF has more than an ironic tinge, one brought into even sharper relief recently when Dublin protested to London about an RAF C-130 Hercules transport plane that landed at Shannon to refuel without first obtaining the required permission.

U.S. military aircraft use Shannon on a frequent basis but with the required permission.

Irelands Answer To The Russian Bombers