Community members gathered outside Ireland's Great Hunger Museum in Connecticut to rally against the closure of the institution by Quinnipiac University. 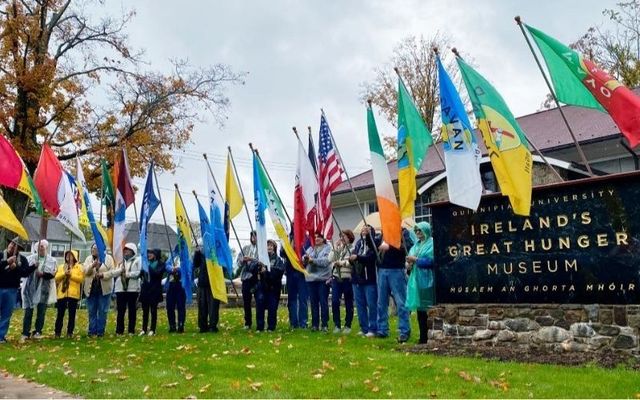 Community members gathered outside Ireland's Great Hunger Museum in Connecticut to protest the closure of the historic building.

Campaigners staged the event over the weekend to "salute the museum" which houses the world's largest collection of art related to the Irish famine.

Ireland's Great Hunger Museum, which is owned by Quinnipiac University, was closed last year due to Covid-19 but it was decided in August by the board of trustees not to reopen the institution.

Since then a coalition of Irish American groups formed the 'Committee to Save Ireland’s Great Hunger Museum' and on Saturday they gathered in front of the museum for live music, street art, and family activities in a demonstration to voice opposition to the closure.

"This salute to the museum is intended to call together a peaceful coalition of voices to save the museum and its collection," according to a statement from the committee seen by RTÉ.

Organizers are hoping to reverse the decision to close the museum but if it doesn't reopen they want to make sure the collection stays intact and is not sold for profit.

Watch here a report by Q30 Television, the student-run television station of Quinnipiac University, on the rally against the closure of Ireland's Great Hunger Museum:

The Attorney General of the US state of Connecticut recently opened an inquiry into the closure of the museum after campaigners raised concerns that it may result in the sale or disbursement of the museum's collection, the property of a non-profit institution.

Quinnipiac University says it does not plan to sell the museum's collection and that efforts are underway to find a new location for the artworks.

Ireland's Great Hunger Museum opened its doors in 2012 and preserves, exhibits, and studies a collection of art, artifacts, and literature related to the Irish Famine/Great Hunger that occurred from 1845–52.

The museum's aim was to educate audiences of all ages about the underlying political, social, economic, and historic causes of the Great Hunger, and the magnitude of the disaster on Ireland and its people.