The 104th anniversary of the Rising was unusually not marked with any public celebrations or parades due to COVID-19. 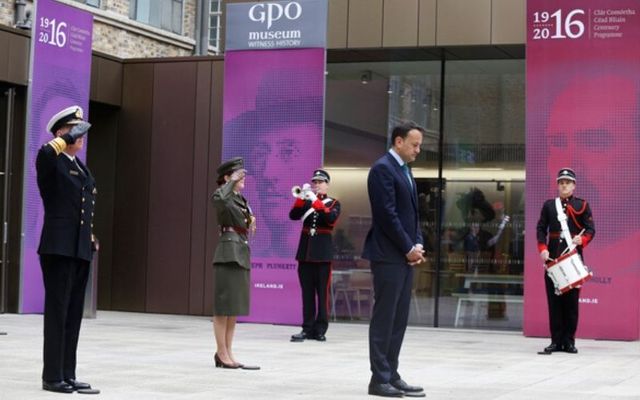 Taoiseach Leo Varadkar at the Easter Rising commemorations in the GPO. Rolling News

The 104th anniversary of the Rising was unusually not marked with any public celebrations or parades due to COVID-19.

Michael D. Higgins held a commemoration in the gardens of Áras an Uachtaráin instead. The President rang the Peace Bell, laid a wreath and observed a minute's silence to honor those who sacrificed their lives for Ireland more than 100 years ago.

The wreath was laid near 16 newly-planted birch trees at Áras an Uachtaráin, which pay tribute to the 16 executed leaders after the Rising.

Read more: The Easter Rising and a day at the races for my Irish grandfather

The minute's silence, meanwhile, also paid respects to those who have died during the COVID-19 pandemic.

Taoiseach Leo Varadkar attended a scaled back commemoration at the General Post Office in Dublin, the epicenter of the Rising 104 years ago.

Capt Darren Reilly reads the Proclamation outside the GPO at a ceremony marking the anniversary of The Easter 1916 Rising. The ceremony was reduced in line with @HSELive #COVID19 guidelines. #ÓglaighnahÉireann would like to wish the people of Ireland a safe and #HappyEaster pic.twitter.com/bqgY07tvRw

He called the experience "surreal."

The attendees all observed social distancing guidelines as they paid their respects to Ireland's fallen heroes.