Never in American history has a sitting president arrived at such historically low approval numbers so quickly. 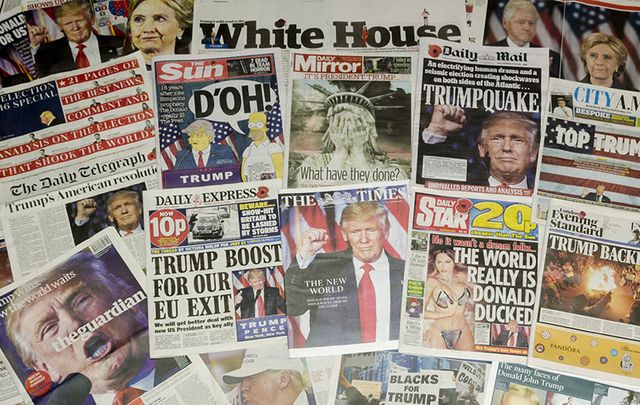 Donald Trump making the front pages of the newspapers...for the wrong reasons.

Never in American history has a sitting president arrived at such historically low approval numbers so quickly.

In fact, it’s the most failed first 100 days of any president ever, according to US historian Douglas Brinkley.

“To be as low as he is in the polls… while the FBI director is on television saying they launched an investigation into your ties with Russia, I don’t know how it can get much worse,” Brinkley, who has written biographies of presidents Gerald Ford, Franklin Roosevelt, and Theodore Roosevelt, told The Washington Post.

Only 37% of Americans approve of Trump’s performance now whilst a whopping 58% disapprove in the latest Gallup public opinion poll.

Most recent polls for Trump's approval are pretty grim pic.twitter.com/uL7qligbQc

A deepening pessimism over the quality of Trump’s leadership alongside his faltering steps on the national and world stage have given all but his most ardent supporters serious pause since his inauguration.

But it’s the smoke rising over allegations of connections between the Trump administration and the Kremlin that looks like it will really ignite.

A seemingly unstoppable series of damaging leaks have alleged there are connections between the Kremlin and Trump associates like his former campaign manager Paul Manafort.

On Wednesday CNN reported the F.B.I. has information that suggests “associates of President Donald Trump communicated with suspected Russian operatives to possibly coordinate the release of information damaging to Hillary Clinton’s campaign.”

Just watched the totally biased and fake news reports of the so-called Russia story on NBC and ABC. Such dishonesty!

Earlier F.B.I. director James Comey told Congress that the bureau is investigating possible collusion. That announcement dramatically undermines the administration at a time when it’s most successful campaign promise fulfillment to date has been a ban on travel from several Muslim majority nations.

That the White House is pressing back against these investigations rather than welcoming them suggests they do not welcome the scrutiny critics say. Seeking to punish whistleblowers rather than resolve to get to the bottom of the claims being made against them is amateur politics they say.

Meanwhile prominent Democrats and even some Republicans are suggesting that an independent investigation is the only way to tackle the ever growing allegations.

On Thursday the GOP’s John McCain called for a select committee or an independent commission to investigate the Russian hacking and collusion claims: “No longer does the Congress have credibility to handle this alone, and I don’t say that lightly,” McCain told MSNBC.

As Republicans try to downplay the controversy and project an image of calm to the media they must be privately worried that - if the allegations are substantiated - that they will be seen in hindsight as willing collaborators in a coverup.