The President of Sinn Féin USA, US General Jim Cullen, has passed away

“He has made a huge contribution to the promotion of human and civil rights in America, Ireland and indeed around the world." 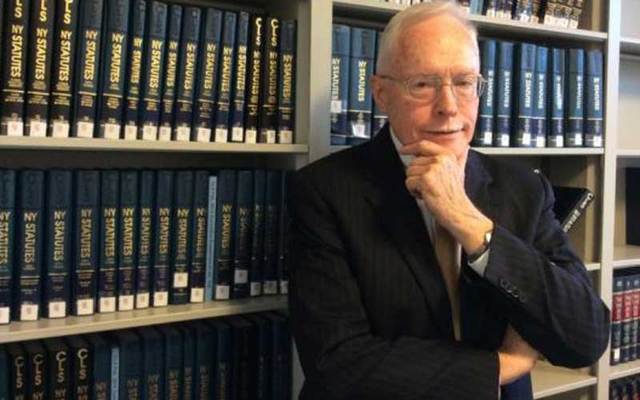 The President of Sinn Féin USA has died. Brigadier General Jim Cullen died at home after an illness. Sinn Fein leader Gerry Adams paid a fulsome tribute to the former US Army General.

“We learn with great regret that Jim Cullen, President of Friends of Sinn Féin in America has passed away. Jim was a distinguished human rights lawyer and a former General in the United States Army having been drafted as a young man.

“He was born in New York but his heart was in Offaly, where his mother came from and that bond remained till his death.

Read More: Gerry Adams made history, but Sinn Fein have only begun

“Jim Cullen defended many Irish republicans in landmark cases in America. He was the first President of the Brehon Law Society formed by Paul O’Dwyer.

“He became the President of Friends of Sinn Féin in 2012, carrying on the work of support for Sinn Féin and the cause of Irish reunification.

“Jim is a great loss to his partner Catherine and to his family.

“He has made a huge contribution to the promotion of human and civil rights in America, Ireland and indeed around the world.

“He will be sadly missed and mourned by his many friends in America and Ireland.

Cullen, a distinguished soldier, human rights advocate, and Irish Republican told Simon Carswell of The Irish Times how angry he was touring Northern Ireland at the beginning of The Troubles, an anger he funneled into political activism on the Irish issue.

Traveling around Northern Ireland in 1969 with a fellow US soldier originally from Co Cavan, he saw how local people had been mistreated by the RUC in Coalisland, Co Tyrone. He saw parallels with how African-Americans were treated in Georgia in the American South when he was stationed there as a young soldier around the same time.

“I saw, most importantly for me, how people were being treated, how the RUC had beaten the hell out of them,” said Mr Cullen.

“The sense of helplessness of the people who were beaten” was what he recalled most from his time in Northern Ireland, he said.

Friends of Sinn Fein USA deeply regret the passing of our President Jim Cullen. A former General in the US Army he became a human rights lawyer who was determined that the truth about what was happening in the north of Ireland was heard in America. Thank you for everything Jim.

“The Irish American Unity Conference mourns the death last night of a great advocate of Irish freedom, peace, and justice, the Honorable Brigadier General James P. Cullen, Esq. Jim was a partner in the law firm Anderson Kill and was a former Chief Judge of the U.S. Army Court of Criminal Appeals.

"He was Past President of the Brehon Law Society and served as Sinn Féin’s legal representative in the United States and President of Friends of Sinn Féin. It is fitting that his passing as a boundless champion of human rights coincides with International Human Rights Day, which will be recognized tomorrow, December 10.

"Jim was a friend to all who knew him and a mentor to many in the Irish-American and broader human rights communities. He was a powerful and effective advocate before Congress and other branches of the United States government. Among his many endeavors, Jim provided compelling testimony to a 2013 Congressional hearing investigating the murder of Human Rights Attorney Pat Finucane, pointedly asking how high up collusion in the British government went in covering up numerous murders.

"Jim Cullen was a righteous man of rare integrity who worked ceaselessly to make the world a better place for all. He will be greatly missed by all who knew him. His legacy will continue to inspire the IAUC and others as we carry on his work."