Sinn Féin to table motion of no confidence against Simon Coveney

The Sinn Féin motion states that Coveney's attempt to appoint Katherine Zappone as UN Special Envoy "amounted to cronyism and fell below the standard of government expected by the public". 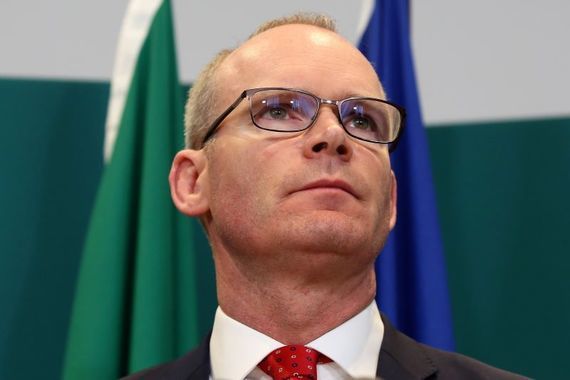 Sinn Féin will table a motion of no-confidence in Minister for Foreign Affairs Simon Coveney next week as a result of his controversial attempt to appoint former Cabinet colleague Katherine Zappone as a UN Special Envoy in July.

The Sinn Féin motion states that the appointment "amounted to cronyism and fell below the standard of government expected by the public" and also notes Coveney's "failure to explain the manner in which the appointment was handled".

Zappone's appointment as UN Special Envoy caused controversy because it was not a publicly advertised position, causing Zappone to eventually relinquish the role in the aftermath of the controversy over the appointment process.

The controversy reached a fever pitch last week when the Department of Foreign Affairs released text messages between Zappone and Coveney indicating that they had discussed the role as early as March this year.

The texts showed that Zappone texted Coveney on March 4 to thank him for "this incredible opportunity" and to say that she would be honored to serve Ireland again.

NEW: As early as March 4th, Katherine Zappone was texting him to thank you "so, so much" for some new role - and wanting to know how long the appointment would be for.

This is months before the spec for any position was drafted by Dept, and four months before Taoiseach knew pic.twitter.com/ILCmL8UxuB

Her appointment was not brought before Cabinet until mid-July, while Taoiseach Micheál Martin said that he was "blindsided" by the appointment.

Coveney has appeared before the Oireachtas Foreign Affairs Committee twice over the incident and apologized last week for causing "such controversy" for the Government.

Sinn Féin Agriculture spokesperson Matt Carthy told RTÉ's Morning Ireland that the party had "no option" but to table a motion of no-confidence and "hold a government minister to account".

Carthy added that the Taoiseach had "failed to do his job" by not holding Coveney to account.

If Micheál Martin won’t hold Ministers to account, Sinn Féin will.
We will table a motion of no-confidence next week.

Mary Lou McDonald, the president of Sinn Féin, is in agreement:

Cronyism is their hallmark - No lessons have been learned by @simoncoveney or ayone else in Govt. The Taoiseach's attachment to and tolerance of old style naked cronyism leaves us with no option but to move a no confidence motion in his minister.

Martin, however, described the motion as "old-style naked opposition politics" and said that any Fianna Fáil TD who votes against a motion of confidence in Coveney or who abstains from the vote will face a six-month suspension from the party.

"Are we seriously suggesting that the appointment of a part-time envoy in itself justifies a vote of no confidence in a minister? I think that's not proportionate or balanced," Martin told Morning Ireland.

The Taoiseach said that lessons needed to be learned from the controversy but added that he expects all Fianna Fáil TDs to support a motion of confidence in Coveney.

However, Fianna Fáil TD John McGuinness penned a letter to party colleagues stating that the Taoiseach had allowed Fianna Fáil to be used as a doormat throughout the controversy and said that Fine Gael was making the party bend like a daisy in a storm.

McGuinness told RTÉ that he "doesn't know yet" if he will vote with Fianna Fáil on the motion.

In an interview with Morning Ireland, Carthy indicated that a number of Fianna Fáil TDs were unhappy over the controversy.

"We have heard lots of members of Fianna Fáil and other parties indicate they are not happy. Some have been front enough to accept it is an act of cronyism."

Meanwhile, Tanáiste Leo Varadkar accused Sinn Féin of "throwing mud in the hope some of it sticks and in doing so they hope it will make them look better".

In a statement, Varadkar said that Sinn Féin was showing a "warped sense of priority" by tabling a no-confidence motion in the Dáil's first week back after its summer recess.

He said that the party was "using their time, in the first week that the Dáil is back, not to discuss housing, the economy or the situation in Northern Ireland but rather an appointment that did not proceed".

The motion is set to be tabled when the Dáil returns on Wednesday.