In a fiery, emotional address Irish-born US Ambassador to the United Nations Samantha Power criticizes the deteriorating situation in Syria. 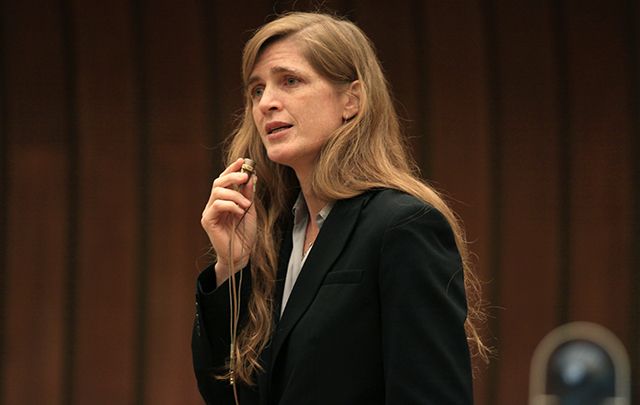 Samantha Power speaking at an event at the United Nations Office at Geneva on June 1, 2010. United States Mission Geneva / WikiCommons

Irish-born US Ambassador to the United Nations Samantha Power spoke out strongly against the deteriorating situation in Syria on Tuesday during a meeting of the U.N. Security Council. The Council was called together on December 13 amidst reports that pro-government forces in Syria are harming citizens as they push to regain complete control from rebel forces of the city of Aleppo. In a fiery, emotional address, Power confronted the Syrian President Bashar al-Assad and his allies in Russia and Iran, condemning the executions of civilians rumored to be taking place.

“To the Assad regime, Russia, and Iran, your forces and proxies are carrying out these crimes. Your barrel bombs and mortars and airstrikes have allowed the militia in Aleppo to encircle tens of thousands of civilians in your ever tightening noose,” said Dublin-born Power, who moved to Pittsburgh when she was nine years old.

“It is your noose. Three member states of the U.N. contributing to a noose around civilians. It should shame you. Instead, by all appearances, it is emboldening you. You are plotting your next assault.”

Power, a former Pulitzer Prize winner who will be replaced as US ambassador to the UN by South Carolina Governor Nikki Haley under the Trump administration, spoke after the Syrian ambassador had denied any mass executions or revenge attacks in the city of Aleppo, asking him and his government, “Are you truly incapable of shame?”

“Is there no act of barbarism against civilians, no execution of a child, that gets under your skin?” she continued.

“That just creeps you out a little bit? Is there nothing you will not lie about or justify?”

Power’s words were quickly condemned by Russia’s envoy to the UN, Vitaly Churkin, however, who quipped that Power was no Mother Theresa and comes from a country with a long list of violations.

As Power finished Churkin took to the stage stating: “The speech by the US representative is particularly strange to me; she gave her speech as if she was Mother Teresa herself. Please, remember which country you represent. Please, remember the track record of your country.”

He continued to mention the role of the US and its allies “in the creation of ISIS as a result of US-UK intervention in Iraq and US policy in this country.”

“I do not wish to remind you about the role that these three countries played in the unfolding of the Syrian crisis, which has resulted in dire consequences and has given space to terrorist organizations in Iraq and Syria,” Churkin added.

The meeting of the UN Security Council was called this week following reports emerging Monday that Assad’s forces were summarily executing dozens of citizens as they pushed into parts of the Aleppo still under rebel control. According to reports, many of those executed were already injured and awaiting medical treatment as a result of the fierce month-long bombing and ground offensive of the government. Other casualties are said to have been fleeing their homes while possibly more than 100 children were trapped inside a building allegedly set on fire by government forces.

U.N. humanitarian spokesman Jens Laerke referred to the current situation in Aleppo as a “complete meltdown of humanity,” as the UN announced on Tuesday that it had credible reports of at least 82 civilians, including 11 women and 13 children, being executed in recent days.

Assad’s allies Russia have denied the claims about civilian executions, however, with the Russian Ministry of Defense claiming on Tuesday that such reports were simply “Russophobia chatter” and that civilians were, in fact, being used as shields by the rebel forces.

“We are tired of hearing the lamentations of our American colleagues from the current administration that the hostilities [in Aleppo] should stop and that Russians are willing to do so only after having an agreement on corridors [for opposition fighters to leave],” Russian Foreign Minister Sergey Lavrov said on Tuesday.

“Nobody is going to harm the civilians,” Churkin added on Tuesday. “The civilians, they can stay, they can go to safe places, they can take advantage of the humanitarian arrangements that are on the ground.”

With the implementation of a ceasefire this morning, an evacuation is currently underway of east Aleppo with at least 53 vehicles transporting 1,000 civilians from the war-torn city. Under a fragile exit deal, ambulances and buses carried the sick and wounded from the rebel-held territory traveling to other rebel-held territory in the west of Aleppo province.

"There hasn't been fighting since the morning," Zouhir Al Shimale, an independent journalist in east Aleppo, told Al Jazeera of the hoped three-day ceasefire.

"Civilians are given the choice to stay or leave. If they stay, they'll be under regime control. Most of the people want to go because they are afraid of potential massacres by the regime," Shimale added.

"In recent days, people are desperate to get to somewhere where we have the supplies - food, medicine, fuel - like we used to have in the days before the siege. Even if they are in refugee camps, but people still want to leave the besieged area."

Thursday’s agreement comes after the breakdown of a similar deal and an explosion of violence on Wednesday in Syria’s second city.

Aleppo has been split between a rebel-controlled east and government-held west since 2012, leading to the displacement of hundreds of thousands of its citizens.