No room for slackers in the new Ireland, Varadkar tells Ireland Funds 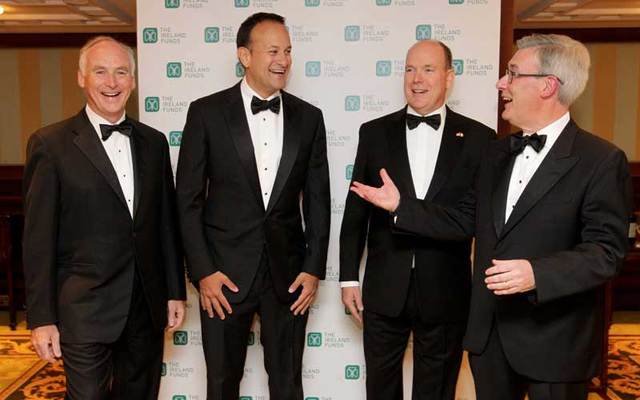 Newly-elected Taoiseach (Prime Minister) Leo Varadkar has told the Ireland Funds conference in Dublin that his government will make it a priority that people "don't get anything for nothing," and people are rewarded for "work and persistence."

He was speaking to more than 300 people who attended the black-tie gala dinner at the Powerscourt Hotel in Enniskerry, Co Wicklow, last night.

The guest of honor was Prince Albert of Monaco, who is currently visiting the birthplace of his mother’s people.

Prince Albert's grandfather Jack Kelly was Irish American, and Varadkar quoted him. Varadkar said: "According to his daughter, (Princess) Grace, he had a very simple view of life. It was: 'You don't get anything for nothing. Everything has to be earned, through work, persistence and honesty.'

"That message could be the slogan for the kind of Ireland I believe in, and which my government is working to achieve.

"A Republic of Opportunity based on work, persistence and honesty, where we provide a threshold below which no one is allowed to fall, and enable people to reach their full potential for the benefit of themselves and their families."

Varadkar’s speech capped an emotional week for the Ireland Funds charity: not only did the organization hold its annual conference but it also celebrated the life and legacy of its founder, Dan Rooney who served as US Ambassador to Ireland during Barack Obama’s first term in office.

The Fund also bid fond farewell to former Taoiseach Enda Kenny who attended one of their sessions and welcomed new leader Leo Varadkar.

Chairman John FitzPatrick stated Rooney was a huge loss. "He was an utter gentleman and utterly selfless. The work of the Ireland Funds is his legacy and Ireland is a better place because of him.”

Speaking to IrishCentral from Dublin, CEO Kieran McLoughlin said the memorial Mass in Dublin, a month after Rooney’s passing, had been “very special indeed, very touching” and a “wonderful celebration of a life so well lived.”

Notably, the presence of President of Ireland Michael D Higgins at the Mass meant that two heads of state paid tribute to Rooney - Barack Obama having personally attended his “overflowing” funeral in Pennsylvania.

In the Funds’ 41 years of existence it has raised over $550 million and counting for worthy causes in Ireland and across the world.

Chairman FitzPatrick said “This is the time when we all meet, worldwide.  We all have our chapters all over the world but this is where we come together and actually see where the investment is going. When you see the projects it energises you to just go back and do more.”

As to what CEO McLoughlin would consider the Funds’ greatest achievement he says, “You could measure it in dollars but most importantly you measure it in lives touched” and he goes on to cite the Funds’ work helping to “break down the sectarian divide in Northern Ireland and we’re immensely proud of that.”

Its annual conference aims to show “first hand the impact the money’s having” and donors travel from as far afield as China, Singapore and Australia to attend.