New favorite in race to become US Ambassador to Ireland

A Cleveland billionaire with roots in County Cork is now a strong contender to be US Ambassador to Ireland. 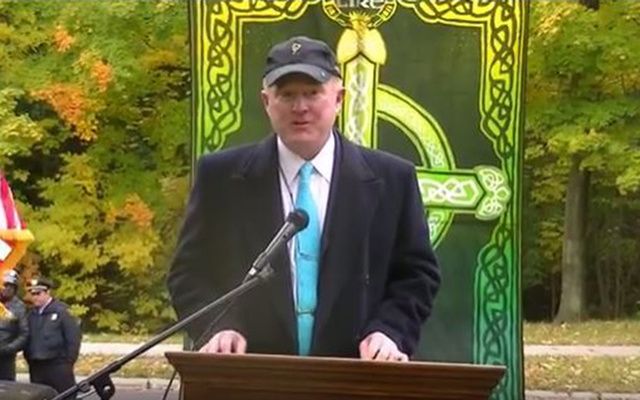 At the opening of the Irish Cultural Garden YouTube

A Cleveland billionaire with roots in County Cork is now a strong contender to be US Ambassador to Ireland. The first person nominated, lawyer and philanthropist Brian Burns, withdrew for health reasons.

Edward Crawford, 77, was a leading fundraiser for Donald Trump during the campaign in the critical state of Ohio, which Trump won easily.

Speaking about Trump during the campaign Crawford said, “We need a positive leader. We need someone that’s going to help us make the changes necessary to put us back on track so that everyone has a chance.”

Crawford, a self-professed “serial entrepreneur,” is Chairman and CEO of Park Ohio Holdings Corp. and The Crawford Group, both headquartered in Cleveland. With $1.4 billion in sales worldwide, they employ 4,800 associates in the U.S., China, Japan, India, Australia and Ireland. Park Ohio specializes in integrated logistics systems and manufactured products.

At the time (2014) he stated, “I think it’s a wonderful, wonderful decision by the Mayo Society to step out and decide to be more inclusive here. There are other great counties in Ireland. I think it gives the Mayo Society the opportunity to reach out to a broader group of individuals that, in one way or another, have contributed to the Irish sense of themselves.”

And then, tongue-in-cheek, he added, “I think they made the right decision in picking a Corkman I have to say.”

The Mayo Association Journal noted that, though born in Manhattan, “in 1948 his electrician father bundled his wife and three sons up and off they headed to sunny California. A couple days later, as they were traveling on Route 20 in Ohio, the engine in their truck blew up. Within a day his mother located an apartment for the family in Cleveland Heights and California became a faded dream. And the family took root in Ohio.”

Crawford’s grandparents both immigrated from Cork. His grandmother, Catherine McCarthy, was from New Market, Boherbue. His grandfather Healy was a Corkman. “We have plenty of Crawford and Hennessey first cousins there yet,” he added.