Do you think growing up in a Boston Irish community in the 1950s would make you more likely to use racist language, if even unwittingly? 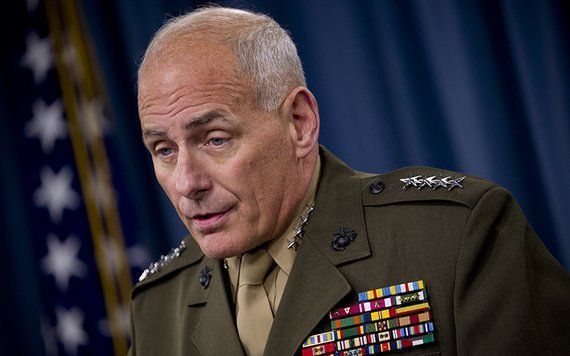 MSNBC hosts have said that John Kelly’s Irish upbringing in 1950s segregated Boston is the reason why he used a racist term for an African American congresswoman.

All week President Trump was embroiled in a war of words with  Black Democratic Congresswoman Frederica Wilson about the phone call he made to the widow of  Sgt. La David T. Johnson, who was killed on active duty in Niger.

Congresswoman Wilson said she had been listening in on the call and that the late soldier’s Commander-in-Chief told his widow, Myeshia Johnson, that he “knew what he signed up for” and referred to him as “your guy”.

“When she got off the phone, she said, ‘He didn’t even know his name. He kept calling him, ‘Your guy,’ ” Wilson described the pregnant and weeping Gold Star widow told her.

The president however angrily dismissed the allegation and said in fact he “had a very nice conversation with the woman, with the wife, who sounded like a lovely woman.”

Congresswoman Wilson’s version of the call was “fabricated” and, he later tweeted, “a total lie”.

The Fake News is going crazy with wacky Congresswoman Wilson(D), who was SECRETLY on a very personal call, and gave a total lie on content!

Later White House Chief of Staff General Kelly, whose own son, Second Lt. Robert Kelly, died on active duty in Afghanistan, said he was so distraught by the controversy, he had taken an hour off to walk around Arlington Cemetery in order to compose himself.

“It stuns me that a member of Congress would have listened in on that conversation — absolutely stuns me,” he wearily told the White House press corps in an emotional eighteen minute monologue.

Controversially, he also said that Wilson had wrongly taken credit for securing funding for a new FBI building in Miami at a ceremony they had both attended in which the building was dedicated to the memory of two fallen agents killed by drug traffickers.

“A congresswoman stood up, and in the long tradition of empty barrels making the most noise, stood up there and all of that and talked about how she was instrumental in getting the funding for that building, and how she took care of her constituents because she got the money.

In an angry appearance on CNN, Wilson fired back that Kelly’s allegation was “a lie”.

"I was not even in Congress in 2009 when the money for the building was secured," she told viewers.

MSNBC host Lawrence O’Donnell, another Boston Irishman, told viewers of his show last night that, “Today John Kelly made just as much of a mess in his attempt to clean up Donald Trump’s mess.”

Whilst he praised Kelly his dignity as a grieving father, he had little but contempt for how his remarks about Wilson.

“He showed no empathy at all for her,” he said gesticulating.

Continuing, he noted that, “They were both born in segregated cities. They both went to segregated schools.

“John Kelly never sat beside a student like Frederica Wilson in his elementary school.

His monologue was applauded by fellow MSNBC host Joy Reid.

Kelly grew up in segregated Boston, in an Irish Catholic neighborhood where women were bullied, not honored, and blacks scorned & rejected.

Wow wow wow. @lawrence noted that Gen. Kelly didn’t even give @RepWilson the dignity of using her name.

However members of the American Dialect Society told CNN they didn’t believe the word had racial connotations; editor Chris Cillizza concluded that his research led him to believe that, "as far as I can tell, it's wrong to call what Kelly said racist.”