She may not like him, but the Wall Street Journal thinks the 37 year old left winger’s views on immigration are actually remarkably like President Trump’s. 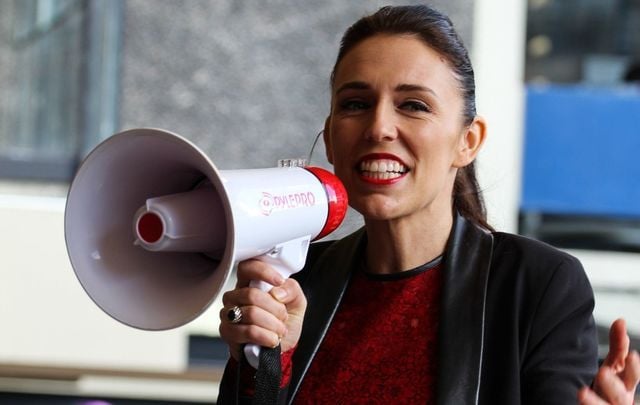 Jacinda Ardern at the University of Auckland Wikimedia Commons

New 37-year-old Labour leader is no fan of Donald Trump but has made sure her first official engagement was meeting Irish president Michael D. Higgins.

The day after St Patrick’s Day this year Jacinda Ardern posted a video of then-Taoiseach (Prime Minister) Enda Kenny at the White House not so subtly ripping into Trump with an unabashed hymn of praise to immigration and the contribution of the Irish to America.

“While my Irish great-grandparents settled here,” she wrote on Facebook, “the rest of my family went to the United States. Pleased to see the Irish PM reminding Trump of why....”

While my Irish great great grandparents settled here, the rest of my family went to the United States. Pleased to see the Irish PM reminding Trump of why....

Her boss, Andrew Little, had done little to revitalize Labour after a third consecutive drubbing at the polls and with the party polling only in the high to mid-20’s the Dominion Post tritely concluded that "he has little charisma and a lack of new ideas".

Faced with a fourth electoral humiliation in a row Little dramatically fell on his sword in July and Ardern was crowned Labour leader uncontested by her colleagues.

Predictions of an easy win for Prime Minister Bill English, judged dull but capable by the public, were quickly cast aside and the polls picked up a stampede of support for the party.

The word “Jacindamania” began to appear in the media and, whilst Labour were still polling slightly behind National, with the support of the small, left-wing Green Party it was thought the party might just be able to pole vault itself into power.

Her election platform was typical of a left of center party: cuts to  doctors’ fees, more affordable housing, more money for schools and action on climate change.

But it was one policy in particular that caught the attention of the international media: a pledge to cut drastically the number of immigrants to New Zealand.

Like the United States, New Zealand is a country built on immigrants but with a housing crisis gripping the nation’s largest city, Auckland, and net immigration in 2016 at a record 68,000 people, the party judged it was time for a cut in numbers.

It was, Arden snapped back, an “offensive” remark to make.

"I absolutely refute the statement that was made there. And anyone who I think has been watching this campaign will know what was said there was absolutely false, and frankly offensive," she told journalists.

Election day saw her party win 46 seats and 37% of the vote, her Green allies won 6% and eight seats, whilst the incumbent National Party lost three seats - leaving them with 56 legislators and 44% of the vote.

Left wing on economic issues but more to the right socially, the party is similar in some ways to Britain’s UKIP: it wants big cuts to immigration, more police officers and a higher minimum wage.

During the election, Peters was noncommittal about who he would propel into the Prime Minister’s seat in the House of Representatives. In Wellington, the world’s most southerly capital, he patiently began negotiations with both parties but on Thursday he made his decision: it was time again for a Labour Government and the woman who once said, “No. Absolutely not,” when asked if she wanted to be Prime Minister would be his boss.

“For too many New Zealanders capitalism has not been their friend but their foe,” he told a watching nation.

“We believe capitalism must regain its human face, and that conviction deeply influenced our decision.”

. Like Trump he loves to berate the media, whom he cordially loathes, and his views on race and immigration would chill a dinner party in liberal circles from Manhattan to Auckland.

"Māori will be disturbed to know that in 17 years' time they will be outnumbered by Asians in New Zealand,” he told Kiwis in 2005.

Immigrants must, he said last year, "salute our flag, respect our laws, honor our institutions and, above all, don't bring absolutely anti-women attitudes with them, treating women like cattle, like fourth-class citizens."

He fiercely resisted recent attempts to remove the Union Jack from New Zealand’s flag and proudly displays a portrait of Queen Elizabeth in his office.

In tone and temperament, he is the polar opposite to Arden who favors gay rights, multiculturalism, and New Zealand becoming a republic at some point in the future.

Dealing with him on a daily basis could prepare her the most important meeting for any head of government: a sit down with The Donald, leader of the free world, in the Oval Office.