Ireland's first gay taoiseach spoke of coming to terms with his sexuality and the tough time he had growing up half Indian in an overwhelmingly white country. 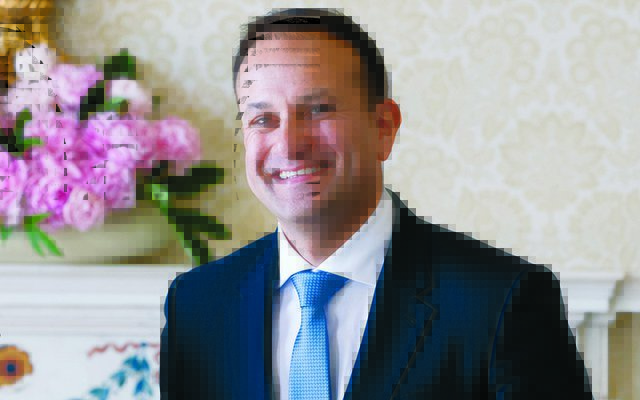 Irish leader Leo Varadkar, the first gay Taoiseach and of half Indian origin, has spoken of his problems coming to terms with his sexuality and the tough time he had growing up with brown skin in an overwhelmingly white country.

New York Times ace columnist Maureen Dowd flew to Ireland to meet Varadkar and the interview took place in his office, under a portrait of Michael Collins. Varadkar's father an Indian physician, met and married his mother an Irish nurse and they moved to Ireland.’

Varadkar trained to be a doctor and qualified but took to politics instead. After just ten years and only 38-years old he was elected taoiseach by the Irish parliament

Varadkar has been heavily criticized in the Irish media recently but his sexuality, however, is not the reason many oppose him. Dowd writes: “It might surprise Irish-Americans, who tend to cling to the thatched-hut, Catholic Church-dominated, fighting-and-drinking image of Eire popularized by John Ford, John Wayne and Maureen O’Hara in “The Quiet Man,” that the complaints have nothing to do with Varadkar’s sexuality or mixed heritage.

They’re mostly about Leo and his policies, not who he is sleeping with. “I don’t care whether his partner is man, woman or vegetable,” declared George Hook, a radio host. Asked how his Indian side affected his outlook, Varadkar replied, “I was always aware that there was a whole bigger world out there because as some kid growing up in Dublin in the early ’80s, I’d have been the only person of color in my class, and my dad would’ve been the only person of color on the street.”

He stated his grandfather, a farmer from Waterford, was fine with an Indian son-in-law. “He went to the sister in town and asked for advice,” Varadkar recounted. “And bizarrely enough, the sister advised him that if he was a Hindu, it’d be O.K. and if he was a Muslim to be very careful.” His father had to agree to learn Catholicism and bring up the kids Catholic.

Dowd asked him if he had spent years hiding his sexuality. “Of course, yeah,” he said. “I would have kept my private life very private. Maybe didn’t have much of a private life as well. You know, a lot of people sort of turn themselves into their careers, and that’s something I definitely did, both as a doctor and a politician.”

When confronted with “those little questions that people ask, understandably, ‘Are you seeing anyone?’ ‘Do you have a girlfriend?’ well, I suppose I’d be very cagey. I’d just say, ‘No,’ or ‘I’m not one to answer those kind of questions.’ ”

But “once I’d sort of come out to myself,” he said, a cloud was lifted. “The biggest thing I say to anyone — and a lot of people would ask me for advice before they come out — is that I don’t regret it for a second. And a lot of the fears that you have are very much your own fears. And the vast majority of people don’t really care. It’s a matter of passing interest. You know, your friends and family, the people who really love you, will always support you no matter what, and those that don’t, you probably don’t need anyway.”

He revealed his mother was scared for him when he disclosed his sexuality. “Yeah, yeah, she was,” he said. “And I suppose, like most Irish moms, and I imagine American moms as well, she’d be very protective. I think, at that point, she would have preferred that I kept it to myself and kept it as something private. But I was very conscious that a referendum was coming up on marriage equality. That was really the catalyst for me. And as a government minister, you know, I couldn’t go out there advocating a change in the Constitution and somehow pretend that it didn’t really affect me or that it wasn’t something that I wasn’t taking personally.

“And I do remember discussions that I would have had with other politicians, and the one that really stuck with me was another minister who was very supportive of marriage equality who talked about being generous to ‘them.’ And so it was ‘them.’ And I thought I needed to tell my colleagues that I was one of ‘them.’ ”“We’re here among you, lots of us. And secondly, the line about it being generosity. It’s actually something that we should have. So if I wasn’t willing to show leadership on this, then I was in the wrong business.”

Ireland's first openly gay prime minister talks about the one word that spurred him to come out: "them." https://t.co/qNlnsbfCKp

Varadkar discussed his partner, a medical doctor training in Chicago at present for a year. “I suppose it’s the first serious relationship I’d ever been in, and he’s somebody who’s unconditionally on my side, and I suppose your mother is that, too, but it’s very different,” he said. “Also, he’s somebody who I can confide in and somebody who can say things to me that I need to hear, if I’ve made a mistake or if I’m way out of order, and he’ll say that to me. And I’ll know he’s right, even if I didn’t like to hear it.

“He’s far brighter than me. When we were in Chicago, we went to a bar where they play ‘Jeopardy,’ and he was pressing the buzzer before there was even time to read the questions.”

Despite scandals, he is still “a member of the Church. "I only practice very occasionally,"

Dowd asked how he will deal with Mike Pence regarded as enemy No. 1 by the L.G.B.T. community when he meets him in Washington in March, Would he discuss gay rights with him?

“Yeah, I would,” he replied. “My experience of the very successful marriage equality referendum here was that if you want to convince people to change their minds, it’s not by shouting at them or lecturing them or attacking them personally or degrading them. That’s not how you change hearts and minds. And I certainly look forward to meeting him. I’d like to hear about his stories and his Irish connections, which he seems to be proud of, and maybe tell him a bit about my story, too.”