An unidentified woman approached the Tanáiste and lobbed what appeared to be a smoothie on him. 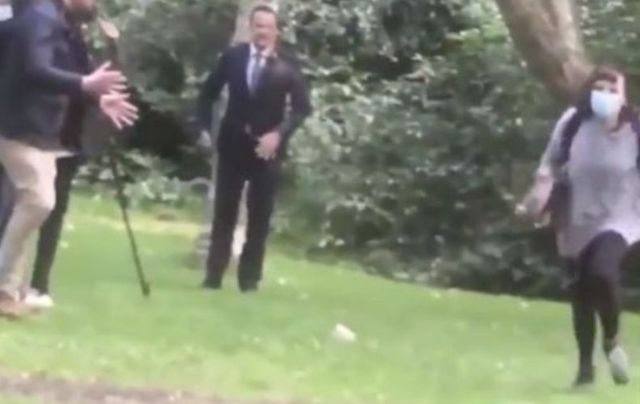 Leo Varadkar was filmed having a drink thrown at him by an unidentified woman. Darren Cleary, Twitter

Video circulating online shows an unidentified woman approach Tanaiste Leo Varadkar and pour a smoothie over the Fine Gael politician on Friday as he addressed a camera in Merrion Square in Dublin.

A video of the incident was posted to Twitter on Friday afternoon but was quickly deleted from the original account. However, a number of accounts have reposted the video, with many condemning the unidentified assailant.

The video shows the unidentified woman hesitating momentarily among a group of onlookers and video crew before approaching Varadkar, who remained oblivious, and throwing the cup right into his face before running away.

Varadkar, covered in liquid, appeared to be in a state of shock as the woman ran away from the scene.

Varadkar is not seeking extra security in the wake of the incident but confirmed that gardaí want to speak to him about the attack.

The Tanáiste said that he currently has a garda driver but no other security detail.

"I don't think one incident should change that," he said.

Gardaí at Pearse Street Garda Station are now investigating the incident and investigators are examing the footage in an attempt to identify the woman.

The incident was condemned on social media on Friday and gardai have reportedly launched an investigation.

Darren Cleary, an Irish radio presenter, described the incident as "nasty and unnecessary."

You can dislike Leo Varadkar, you can criticise his policies, you can disagree with him, but this is nasty and unnecessary thing to do. pic.twitter.com/ze8eVByU3S

Irish businessman Gavin Duffy said in a tweet: "What a horribly uncouth thing to do to Tánaiste Leo Varadkar. This is an attack on our democracy not him. It’s reported it was coffee but it could have been anything including acid. We need to better protect our politicians."

"Can't stand Fine Gael or Fianna Fáil, but this is not acceptable," another Twitter user wrote.

"No matter what your political opinions are this is not okay!! I am totally embarrassed for you, whoever you are... Mortified actually," said another.

So some absolute idiot decided it would be okay to throw a cup of coffee over Leo Varadkar and run away!! No matter what your political opinions are this is not okay!! I am totally embarrassed for you, whoever you are... Mortified actually!! pic.twitter.com/laeJkLENEw

Read more: From Lord of the Rings to Churchill: Leo Varadkar's most noteworthy speech references