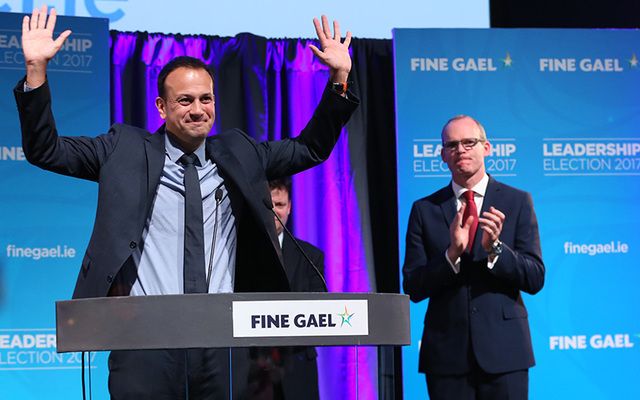 The Dubliner won 60 percent of the overall party vote, earning major support from other parliamentary members while Coveney won the membership vote.

As leader of the governing party in Ireland, Varadkar will now become Taoiseach (Prime Minister) of the Irish government on June 13 after a vote in parliament that is all but certain to go in his favor.

Here’s all you need to know about Ireland’s new leader:

Varadkar became the first openly gay cabinet minister in Ireland in January 2015 speaking publically about it for the first time in an interview with Irish public broadcaster RTÉ.

"It’s not something that defines me,” he said. “I'm not a half-Indian politician, or a doctor politician or a gay politician for that matter. It’s just part of who I am, it doesn't define me, it is part of my character I suppose".

He was a prominent supporter of the Yes campaign in the same-sex marriage referendum that took place in Ireland in May 2015.

The Dubliner is also only the fourth openly gay national leader in modern history.

Despite this and his presentation as the primary political leader striving toward a more liberal and progressive Ireland - previously a highly socially conservative country -  Varadkar’s politics generally fall in line with the Fine Gael party’s more conservative ethos. During the leadership campaign,  he was, in particular, reluctant to speak on the issue of abortion, an issue on which large sections of the Irish population are calling for a referendum.

Although both he and many in the Irish media draw comparisons between himself and leaders such as France's Emmanuel Macron or Canada's Justin Trudeau, Varadkar is yet to show the same type of liberal policies. He is also viewed in left-wing circles in Ireland as an austerity politician out of touch with the country’s working classes, a view heightened in recent months by his campaign to crack down on social welfare fraud.

He was a doctor before choosing a life in politics

Born in Dublin and studying medicine at Trinity College Dublin, Varadkar spent some time as a general practitioner before focusing on a full-time political career.

He initially began to read law in Trinity before switching to the School of Medicine, graduating in 2003. He spent several years working as a junior doctor in Connolly Hospital Blanchardstown before qualifying as a GP in 2010.

Having joined Fine Gael in his youth, Varadkar contested his first local election in 1999, aged 20, in his second year reading medicine. However, he only scored 380 first-preference votes and was eliminated in the fifth count.

He was co-opted onto the Fingal County Council in 2004 before his election as a TD in 2007.

He’s the son of an immigrant to Ireland

A TD for the Dublin-West constituency, Varadkar is the youngest and only son of Mumbai-born Maharashtrian Ashok Varadkar and Co. Wexford-born Miriam Varadkar.

The couple met while both working in healthcare in England, settling in Ireland before Varadkar was born.

"If my election shows anything it's that prejudice has no hold in this Republic," he said after his win.

"When my father traveled 5,000 miles to build a new home in Ireland, I doubt he ever dreamed his son would grow up to be its leader."

At just 38 years old, Varadkar will not only become Ireland’s first openly gay Taoiseach but also the country’s youngest. His competitor for the top spot, Minister for Housing Simon Coveney, was also a young candidate at 44 years old.

He served in three ministerial positions before becoming Taoiseach

Having only been elected a TD ten years ago, his rise through the ranks has been meteoric, called to the front bench immediately by his predecessor as party leader, Enda Kenny.

Previously serving on the Final County Council, he was appointed as Fine Gael’s spokesman for Enterprise, Trade, and Employment straight after his election win in the 2007 general election.

When he was re-elected and Fine Gael came back into power in the 2011 general election, he was appointed Transport Minister and went on to replace James Reilly as Health minister in a cabinet reshuffle in 2014, possibly the most challenging role he’s held so far.

Varadkar was appointed as Social ­Protection Minister after he was returned to the Dáil in 2016.

What are your opinions of Ireland's newest leader? Let us know your thoughts in the comments section below.