Molly Malone in a burqa among graphic images and warnings. 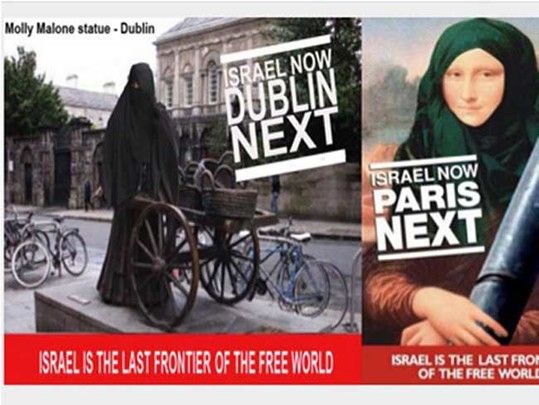 The Israeli embassy in Dublin has been slammed after grotesque images and warnings of an Islamic invasion of Ireland were posted on its Facebook page.

The images depicted the Molly Malone statue in Dublin wearing a burka and the embassy's Facebook page claimed that Ireland would be the next state to fall under Islamic influence. Israeli media reports have accused Ireland of being far too pro-Palestinian in the current Gaza conflict.

Images of the Mona Lisa in Paris wearing a niqab and carrying a rocket launcher also featured in the propaganda.

Other images posted on the Dublin embassy’s Facebook page included Michelangelo's David shown in Arab headgear and wired up as a suicide bomber with a warning to Italy and Copenhagen’s Little Mermaid shown holding a gun.

A spokesman for the Israeli embassy in Dublin has confirmed to the Irish Sun newspaper that the offensive images were posted from his embassy’s official social media accounts.

They have since been removed by Facebook and the report says Dublin was not the only city to come into the Israeli propaganda sights.

The Irish Sun reports that the Israel In Ireland Facebook and Twitter accounts have been blasted for sharing the series of controversial posts.

An embassy spokesman told the paper: “Yes they were sent from the official Facebook but they were taken down, I don’t know why.

“Often things get deleted for space reasons but it wasn’t taken down because of any complaints.”

He said: “On one hand it’s childish and lacks maturity, but when you consider 1,050 people have been killed, it’s wrong to be making light of the situation,” he said referring to the Gaza conflict. Criticism of the Israeli invasion has been wide-spread and fervent in Ireland.

“This is such a sensitive time, you would think an embassy would treat it as such and would send out messages of reconciliation, not fan the flames.