#HomeToWork posters aim to highlight opportunities in Ireland for the diaspora. 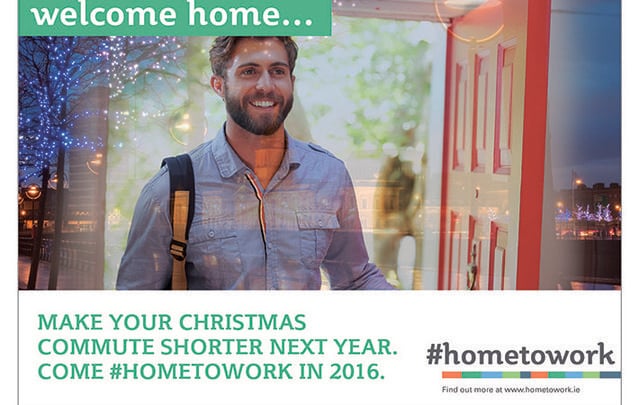 #HomeToWork posters aim to highlight opportunities in Ireland for the diaspora. DFA

The Irish Government has launched an advertising campaign to encourage emigrants arriving home for their Christmas holiday to move back to Ireland permanently.

The posters were will be placed on display this week in the country’s main airports – Dublin, Cork, Shannon and Knock – asking expats “to come #HomeToWork.”

One of the posters put on display shows an emigrant arriving back to Ireland. It’s tagline reads: “Make your Christmas commute shorter next year. Come #hometowork in 2016.” The second will be seen by emigrants when they’re entering the departures areas of the airport, en route to their adoptive homes. It will read: “Slán go fóill [meaning “Goodbye for now”]. Hope to see you again soon. Have you thought about making 2016 the year you move back to Ireland?”

The initiative was announced by Minister of State for the Diaspora Jimmy Deenihan at the Other Voices festival, in Dingle, County Kerry. Speaking at the conference Ireland’s Edge – Creativity, the Diaspora and Realising Potential, he said, “We want to see our emigrants returning to play their part in the rebuilding of our economy, bringing home their experience to take up some of the jobs that are now being created. We want them back amongst their families and friends.

“We want to start a national conversation with our diaspora about coming home to work.”

Today @othervoiceslive 'Ireland's Edge'- we start a national conversation with our diaspora about coming #hometowork pic.twitter.com/tzCPoXlitJ

The Minister said the aim of the campaign is to reach out to the Global Irish family and make them aware of the opportunities that are now available here in Ireland. He said those who have already returned home and can now be great ambassadors for others.

Deenihan said Ireland has “good news that it wants to share with emigrants. In a statement released by the Department of Foreign affairs they listed these highlights:

- The Irish government is determined to restore all the jobs lost in the recession by 2018 and to get unemployment down to 6% by 2020.

- To ensure the economic recovery is felt across regions in Ireland a €250 million regional jobs strategy is being rolled out across the country – with 5 in a series of 8 Regional Action Plans already launched.

- The government’s budget deficit has been reduced from a peak of 12.5% of GDP in 2011 to an expected 1.2% next year. Their target is to eliminate it altogether in 2018 and deliver a balanced budget.

These posters are similar to those posted at the airports by Ireland’s Industrial Development Agency (IDA) in the late 1980s, at the tail end of that recession. Their campaign of the “young Europeans” aimed at attracting foreign investment into Ireland by advertising the educated workforce.

Speaking about the 2015 Irish Government campaign Feargal Purcell told the Irish Times it takes its cue from #HometoVote social media trend which was one of the most internationally influential hashtags on the Twitter this year. The #HomeToVote campaign aimed at encouraging people to come home to Ireland to vote in the same sex marriage referendum in May.

Read more: Irish marriage equality among most influential hashtags on Twitter in 2015

Purcell added that “one thousand jobs a week are being created here and added that these signs would simply be “encouraging them to shorten their commute” by coming home.

Minister Deenihan added that he is “looking at the various barriers that stand in the way of returning emigrants and this group will examine these and provide a whole-of-Government approach to them where possible.”

The group he referred to was the inter-departmental and inter-agency group who worked on the implementation of the Diaspora Policy. This policy is the Irish Government’s first comprehensive policy for engagement with Ireland’s diaspora which was published last March.