The president told RTÉ's US correspondent Caitriona Perry that she had a "nice smile" when she was in the Oval Office earlier this year. 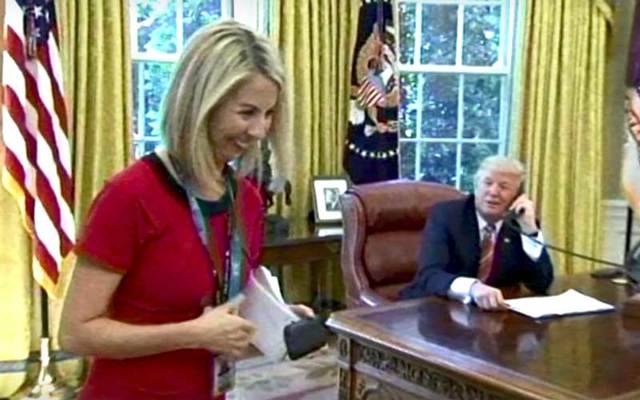 Irish journalist Caitriona Perry has said it was “bizarre” when US President Donald Trump told her she had a “nice smile” when she was in the Oval Office earlier this year.

The RTÉ US correspondent told Ryan Tubridy on the "Late Late Show": “It was probably more like an eye-roll type moment. I didn’t do that because I’m a professional.”

Perry was in the Oval Office at the White House to witness President Trump begin a telephone conversation with the newly-appointed Taoiseach Leo Varadkar last June, the Irish Independent reports. The president beckoned her to his desk with his finger, then asked her name and where she was from.

He then told Varadkar: “She has a nice smile on her face. I bet she treats you well.”

Perry, whose book "In America – Tales from Trump Country" is out now, said that the media in the US replayed footage of the moment on television and many people thought the president’s behavior was demeaning to her.

When asked about being beckoned by Trump, she said: “Honestly, I was thinking ‘this is a bit bizarre,’” but as he was the President of the United States she approached his desk.

“It was also bizarre as of course I would love a one-on-one with the president to question him about all his policies and everything else that he does, but that was not the time and place.

“I was walking up thinking where is this going…It was just very bizarre,” she said.

“Honestly, it was no big deal.”

When asked by Tubridy if she felt flattered or insulted, she said, “Neither. I’m around the president a lot. I know how he behaves. I know what he says. He comes out with stuff like that.”

She added: “Can I point out that the person giggling was not me. People thought that was me. It was the Deputy National Security Adviser Dina Powell.”