Irish Afghan community calls on Government to save family members

The asylum seekers urged the Government to provide humanitarian visas to assist the repatriation of their families at a hastily organized outdoor event on Wednesday. 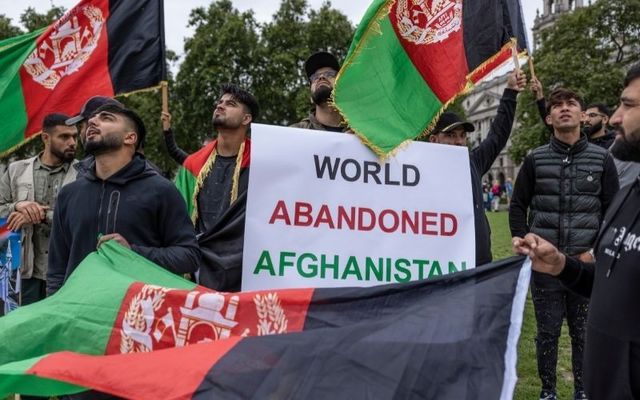 A number of Afghan asylum seekers gathered in Galway on Wednesday afternoon to call on the Irish Government to protect family members stranded in Afghanistan since the Taliban took control of the country last week.

The asylum seekers urged the Government to provide humanitarian visas to assist the repatriation of their families at the hastily-organized outdoor event on Wednesday.

They also called on the Government to expedite their own asylum applications.

Several asylum seekers told RTÉ that they spent a number of sleepless nights trying to contact loved ones in Afghanistan and also said that they feared that the Taliban are monitoring phone and internet traffic.

Janet Kehelly, from the Croí na Gaillimhe Resource Centre, called on the Government to "make things a little easier" on the Afghan community in Ireland.

"Some of these guys are here up to five years waiting for an interview. I think the Department of Justice could really expedite that process."

Khalid Ahmadzay, an Afghan asylum seeker who attended the event on Wednesday, said that he has spent three days worrying over his ten-year-old son after he lost contact with him over the weekend.

Other asylum seekers strongly criticized the international community for failing to protect Afghanistan from the Taliban.

Matin Meragudin said that "the whole world should feel ashamed" for allowing the Taliban to march to power without intervening.

"The international community is sleeping and these [the Taliban] are like a snake. When they wake up, they will bite the whole world," he said.