The protesters denounced the Taliban's record on women's rights and called on the Irish Government not to recognize the newly-installed Taliban government in Afghanistan. 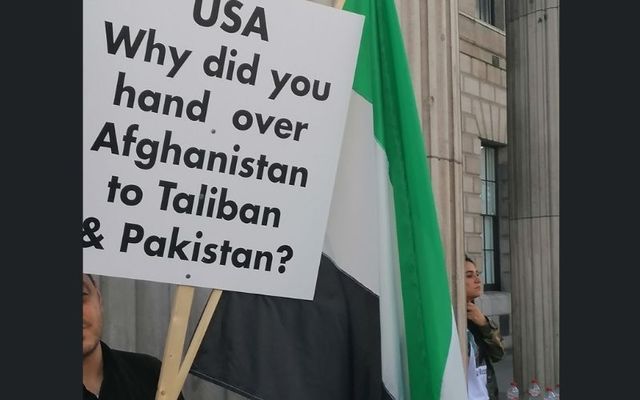 A protester holds up a banner at Sunday's protest at the GPO. Thomasprior147 Twitter

Several hundred members of Ireland's Afghan community gathered at the General Post Office Sunday to protest against the Taliban regime in Afghanistan.

The protesters denounced the Taliban's record on women's rights and called on the Irish Government not to recognize the newly-installed Taliban government in Afghanistan.

The demonstrators also called on the Irish Government to use its influence on the United Nations Security Council to help people in Afghanistan, while several protesters took aim at US President Joe Biden, stating that the USA had abandoned the country.

"Shame on you Joe Biden," several protesters shouted during the protest on Sunday afternoon.

Others carried banners accusing the US of handing over Afghanistan to Pakistan and the Taliban.

Most protesters present at Sunday's demonstration fled to Ireland after the Taliban came to power in the 1990s and still have family members in Afghanistan.

The protesters were joined by some Irish supporters, who stood in solidarity with Afghan women after the Taliban reportedly shut down the Afghan Government's Ministry of Women's Affairs on Friday.

The Afghan Ministry of Education also announced on Friday that secondary schools would reopen for boys and male teachers could return to work, making no mention of female teachers or students.

The Taliban had promised to rule more moderately after taking power last month but have not allowed Afghan women to return to work and have introduced rules dictating what women can wear in universities.

Sajad Bakhshi, a member of Ireland's Afghan community who attended Sunday's protest, told the Irish Times that he still had family remaining in Afghanistan and that he was protesting to show Afghan women that the world had not turned its back on them.

"I may sound Irish and act Irish but my skin and blood will always be Afghan and I am here to protest for the Afghan people," he told the Irish Times.

"My message is for the females of Afghanistan, please keep strong and don’t stop now. Please keep your strikes up and we are with you. We condemn the brutality [towards] females."

"Particularly females who have been affected by the hardship," she told the Irish Times. "In the space of a week, people’s lives turned upside down. Once the Taliban regime comes in everyone is forced into this miserable life they lived two decades ago."