Amy Coney Barrett will become an associate justice on the Supreme Court if she wins the Senate's approval. 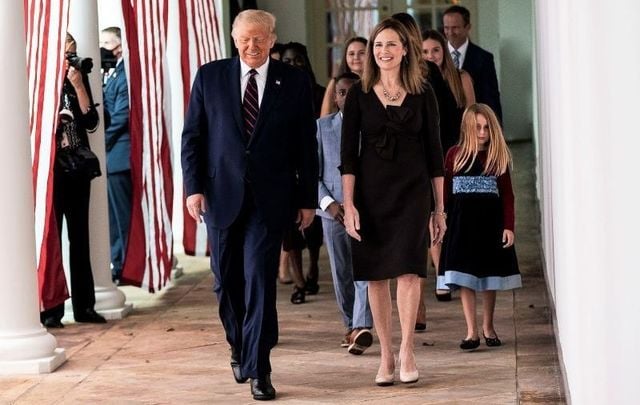 The two letters outline how hundreds of faculty at the famous university are opposed to Barrett's nomination to the US Supreme Court.

The first letter, dated October 10, was circulated by Notre Dame Professor of English John Duffy and was signed by 93 professors at the university, including several professors at Notre Dame's law school. It was posted on a website called Teacher-Scholar-Activist.

English's letter optimistically calls on Barrett, a circuit judge on the US Court of Appeals for the 7th Circuit, to make a statement calling for a halt in the nomination process until after November's presidential election.

English notes that Barrett is unlikely to halt the process but said that it would be a good thing for the nation and that she would be providing a model of "civic selflessness."

While the letter generated almost 100 signatures, some professors felt that it didn't go far enough.

She also condemned Barrett's comments on sexuality, pointing to when the Supreme Court nominee referred to sexual orientation as a preference.

The letter is still collecting signatures on a private Google document only available to faculty, but the text of the second letter can be read here on Forbes.

Shrader-Frechette, along with her colleagues, said that Jenkins had given the impression that Notre Dame was officially endorsing Donald Trump and the appointment of Barrett by attending the Rose Garden ceremony, and pointed to the fact that Notre Dame's faculty boasts a diverse political background.

She said that Republican Party efforts to push Barrett through before the election were wrong based on the precedent set by Republicans four years ago when they prevented former President Barack Obama from appointing Merrick Garland to the Supreme Court in 2016.

Additionally, she said that many on the Notre Dame faculty were opposed to the US President on a wide range of issues, including "his assault on democratic norms" and his "inability to separate personal and partisan interests from the national interest."

Finally, the letter opposes Barrett's nomination to the Supreme Court, arguing that her positions on matters such as health care, immigrant rights, gun safety, and worker rights are troubling.

"We are not convinced that Judge Barrett, with her originalist interpretation of the Constitution, would protect the many people in society who are ignored, excluded, or treated unjustly," the letter says.