Irish bookmakers Paddy Power think it highly likely Donald Trump will not make it through his four-year term. 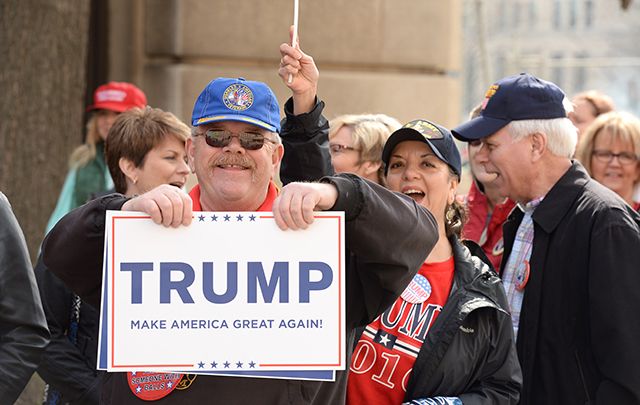 We don't think this group will be placing any bets! iStock

Irish bookmakers Paddy Power are offering you the chance to win bigly in the event of President-elect Donald J. Trump being impeached within his first six months in office. With just hours to go before the former reality TV star becomes the 45th President of the United States, the Irish betting firm is also wagering against Trump lasting the four years of his term.

The odds being offered are not high so if either if one of those bets pays off, you would probably take home an amount small enough to fit in even Donald Trump’s hands. For many in the country, however, it be just the fact that their dream has come true which would be the best prize of all.

The odds of him not completing his first term in office currently stand at 7/4, while the offer is 4/1 that Trump will be impeached within the first six months of his presidency.

That’s if he makes it that far. It’s a bit of a long-shot, but Paddy Power is offering odds of 20/1 that he won’t be inaugurated as the 45th President later this morning.

Donald Trump and his wife Melania.

While Russia is predicted to be the country where the next President will make his first state visit, Ireland comes in second at 6/4, followed by Canada, Mexico, and China.

For the inauguration ceremony itself, there are plenty of places where you can make a pretty penny if you're willing to take a flutter on the president-elect. From the color of his tie, the length of his speech, how many viewers will tune in, right down to whether Trump’s skin shade will reach Tiger’s Eye or a Vivid Tangelo, there is a whole range of bets on how today will pan out.

One of the favorites is what word/phrase Trump will use first in his inauguration speech from “Make America Great Again” at 5/4, right down to Father Jack’s favorite “Feck, Arse, Drink, Girls” at 500/1.

While Trump’s not yet officially the president, the Irish bookmakers are already looking ahead to 2020 and who will run during the next election.

Trump is currently at 9/5 to run for a second term while House Speaker Paul Ryan and Vice President-elect Mike Pence both come in at 7/1. Other names thrown in the hat include Michelle Obama, Tim Kaine, Elizabeth Warren, Hillary Clinton, Joe Biden and Bernie Sanders as well as Leonardo Di Caprio, Kanye West, Ivanka Trump and Kim Kardashian.

While some of the odds advertised by Paddy Power may seem attractive, it should be remembered that the company was forced to make a massive U-turn last November 9 after they rashly paid out to those who bet on Democratic candidate Hillary Clinton before all votes were even cast, so sure were they of a Clinton victory. They also offered 100/1 odds on Trump winning the presidency back in 2012, so one of the long shots could be worth a few quid either way.

Imagine if you missed out on this opportunity and went away empty-handed? Sad!

Do you think Trump will make it through the four years? Let us know your thoughts in the comments section, below.