Greek bailout would have cost Ireland over $1 billion

If Greece accepted the terms of a new bailout last Sunday, Ireland would have been obliged to provide two percent of 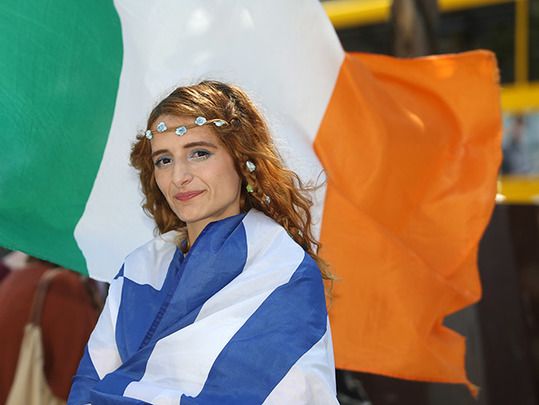 Katerina Efstathiou from Greece, living in Dublin, joined protesters from the Greece Solidarity Movement who held a protest on Saturday in Dublin in solidarity with the Greek people. Photocall Ireland

The Irish people would have been expected to pay as much as $1.1 billion toward a new Greek bailout plan if Greece had accepted a third bailout program in the austerity referendum last Sunday.

It was announced yesterday that the Greek people voted against accepting a third bailout program from Europe despite pressure from Angela Merkel, the European Commission, and socialists within in the European Parliament to accept. The proposed bailout was also being backed by the majority of Greece’s political parties, as well as all private TV stations in the country.

Irish Public Expenditure Minister Brendan Howlin revealed that if the Greeks had accepted the further bailout, Ireland would be expected to contribute up to $1.1 billion under its international obligations.

Last week, the International Monetary Fund (IMF) warned that the Greek economy would require a further $55 billion if it was to survive and a third bailout plan was proposed to the Greek government. The bailout would decrease Greek debt in return for the implementation of further austerity measures.

The Department of Finance revealed that had Athens accepted this proposal, the Irish people would have contributed 2 percent or $1.1 billion to the program.

This figure is significantly higher than previous funds given to Greece by the Irish and could have restricted the Irish government's own budget spending.

Throughout Greece’s previous two bailout programs, Ireland was still on its own recovery program and was not expected to contribute as much to another country’s bailout fund. In May 2010, Ireland gave $383 million towards a Greek bailout.

As Ireland is no longer on its own rescue program, the contribution percentage expected is much higher.

Following the 61 per cent vote against a third bailout program, the Greek government yesterday signed in a new Finance Minister, Euclid Tsakalotos, when previous Minister, Yanis Varoufakis, resigned. Tsakalotos and Greek Prime Minister Alexis Tsipras are now expected to provide new proposals for a deal with their country’s European creditors.

A statement from the Greek political party leaders read: “Immediate priority is to restore the liquidity in the financial system, in consultation with the ECB.

“The recent verdict of the Greek people does not comprise a mandate of rupture, but a mandate for continuing and strengthening the effort of achieving a socially just and economically sustainable agreement. Towards this direction, the Government assumes the responsibility of continuing the negotiations.”

Credit ratings agency Fitch believes that the “no” vote drastically increased the chances of Greece leaving the Eurozone and returning to their previous pre-Euro currency, although they do believe that there is still a limited amount of time for a new deal to be forged with creditors.

Yesterday, the Italian Economy Minister revealed that Eurozone countries were open to a new proposal.

The Greek banks will remain closed today and throughout tomorrow as limitations on the money available to be withdrawn stay in place while the the European Central Bank (ECB) maintain their liquidity assistance in order to keep Greek banks afloat.

There is a danger that, in the coming days, Greek banks will run out of money.

There are currently three possible ways in which the crisis will progress: The Troika (committee made up by the European Commission, ECB and IMF to organize loans during the Eurozone crisis), hoping to avoid a Greek exit from the Eurozone, will concede and allow the Greek government to impose further taxes on the wealthy, a deal that would be accepted by the Greek people; the Greek government, in a drastic attempt to stay within the Eurozone, will concede to Troika and accept the previous deal, without the backing of the Greek population; or no deal is reached between Greece and its creditors.

The “no” vote is said to be a historic vote by the people against heavy pressure from Europe that could change the face of the eurozone and the EU. The vote is also seen as a massive mobilization of the working class who voted over 70 per cent “no” in opposition to further austerity measures that have seen the rate of depression and suicide in the country soar.

On Saturday, thousands of Irish people rallied in Dublin in support of a “no vote” in Greece.