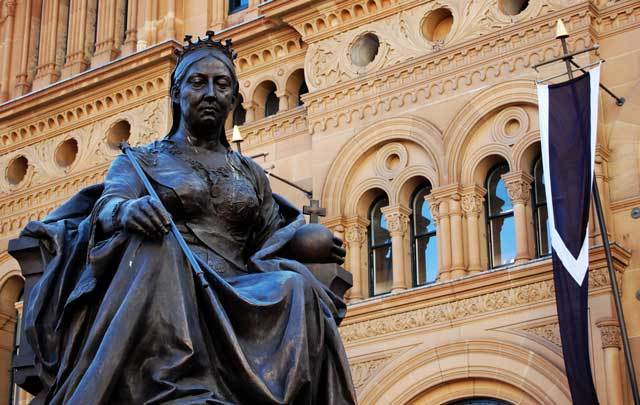 The statue outside the Queen Victoria building in Sydney, Australia. iStock/Getty Images

Former Irish leader John Bruton opposed the decision to give a massive monument of Queen Victoria to Australia 30 years ago, declassified Irish cabinet papers have revealed.

Bruton, at the time the minister for finance, and John Teahan, the director of the National Museum of Ireland, strongly objected to the transport of the statue, but Taoiseach Garret FitzGerald supported the plan and the statue was sent to Sydney, where it now stands outside the restored Queen Victoria Building, the Irish Times reports.

The 15-foot bronze statue, which was the work of Irish artist John Hughes, was originally unveiled by the Lord Lieutenant Lord Aberdeen at Leinster House in Dublin in 1908. It was still there in 1922, after Irish independence from the UK, and Leinster House became the home of the Dáil and Seanad.

In 1948, after decades of protests from politicians, the statue was moved to storage and there it remained until June 1986, when the office of the Lord Mayor of Sydney sent a request to Joseph Small, the Irish Ambassador to Australia asking Ireland to lend the statue of Queen Victoria to Australia.

“For over two years we have been searching the world in vain for a life-size bronze statue of Queen Victoria. We have looked to India, Pakistan, Sri Lanka, South Africa, Yemen, etc all to no avail. Yesterday, just when we were giving up hope we received advice that there is stored in Dublin a fine bronze statue of Queen Victoria ... it appears to be ideal to locate it in front of the Queen Victoria Building looking towards the town,” said the letter from Sutherland’s office.

Taoiseach Garret FitzGerald was in favor of sending the statue to Australia. He received a letter from Niall Glasser, director of promotion for the Sydney project, which said that the loan or a gift of the monument would be accepted with gratitude.

“There it would stand as a constant reminder of the permanent bond and friendship between our two countries,” he said, adding that the statue would be maintained.

However, John Teahan, the director of the National Museum of Ireland, objected to the plan, arguing that the statue was the work of an Irish artist .

“If we are deemed not to be mature enough to distinguish between the art-historical merits of Hughes’ Victoria, for instance, and a symbol of authority, which does not or at least should not apply, I advise that such a figure be retained and protected until we have grown up sufficiently to look that Queen, long dead, straight in the eye,” wrote Teahan in a memo.

Bruton agreed when the issue came before the cabinet on September 11th.

“The Minister for Finance strongly objects to the removal of the Queen Victoria statue from Ireland. The monument is representative of one of the many traditions of Irish history. It is part of our heritage in no less a way than Norman or Viking remains,” said a memo to cabinet from the department of finance.

“In the context of the Anglo Irish Agreement, in which reference has been made to the ‘two traditions’, the Minister for Finance sees great danger in publicly jettisoning a figure of the second tradition.

“The repercussions for the Government from such an act would far outweigh any minor adverse publicity that might arise if the Australian request were refused.”

Despite these objections, the cabinet agreed to send the statue to Australia on a long-term loan.

The Queen Victoria statue was transported to Sydney by sea and was unveiled in December 1987.