Large Conservative majority projected in UK general election as nationalists in Northern Ireland outstrip unionists for the first time ever. 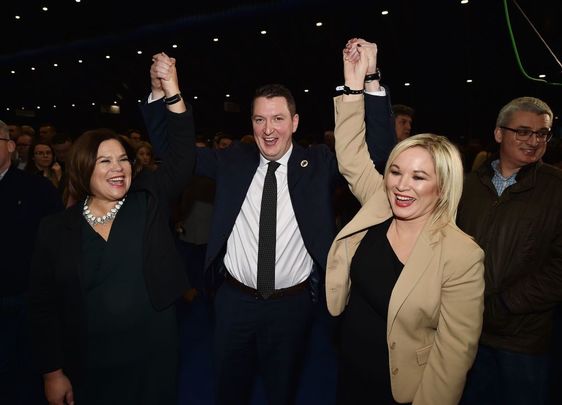 John Finucane is the son of murdered attorney Pat Finucane whose death in 1989 remains one of the most controversial killings of The Troubles.

Dodds has been a powerful leader in Northern Irish politics for decades and achieved a very high profile as a lead negotiator in talks with several British governments.

Finucane's victory was the highlight of a huge night for Irish nationalism as a pact between the SDLP and Sinn Féin helped nationalist parties take more parliamentary seats than Unionists for the first time ever.

My first picture with the new MP for North Belfast @johnfinucane pic.twitter.com/6ra4dcABw0

The DUP, once kingmakers in the  British parliament when they propped up the Tory government, had a disastrous election losing North Belfast and South Belfast and seeing their vote share drop.

In North Down, they were defeated by Stephen Farry, an Alliance Party candidate, in a major shock. He took the seat formerly held by Lady Sylvia Hermon.

Early exit polls predicted a large Conservative Party majority in the UK general election, as polls closed across the country at 10 pm GMT and so it proved.

The result will pave the way for the UK to leave the European Union in two months' time, with leader Boris Johnson promising throughout the election campaign that he would deliver Brexit.

Thank you to everyone across our great country who voted, who volunteered, who stood as candidates. We live in the greatest democracy in the world. pic.twitter.com/1MuEMXqWHq

The predicted seat count at 3 am London time (10 pm) shows 357 seats for the Boris Johnson-led Tory party, with Jeremy Corbyn's Labour Party only picking up 201 seats. Only 326 seats were needed for Johnson to claim 10 Downing Street as Prime Minister once more, giving him an 86-seat majority if the first predictions are true.

The Scottish Nationalist Party are predicted with 55 seats and the Liberal Democrats with 13. The SNP landslide in Scotland sparks a new debate about another vote on Scottish independence.

It would make it Labour's worst result since 1935.

Read more: On British Brexit election eve DUP is besieged within its own siege

The result is a massive blow for the Democratic Unionist Party (DUP) in Northern Ireland, who were previously propping up the Tory government but whose seats will not now be required to form the majority.

The DUP's insistence that a border not be placed down the Irish Sea, separating Northern Ireland from the rest of the UK when it leaves the European Union, had been a major factor in the stagnant Brexit negotiations.

Johnson will no longer need to keep the DUP onside to keep in government and is free to progress the backstop and Brexit without relying on DUP votes.

This is how the #exitpoll looks in Britain's general election—we'll have live results as they come in through the night https://t.co/q056Ofvbyy pic.twitter.com/HeYWIEN9pY

Calls for the resignation of Labour leader Jeremy Corbyn were quick to emerge on Thursday evening as predictions showed a devastating defeat for the party.

The predictions also had an immediate effect on the Pound Sterling which shot up against the US dollar.

Do you believe that Boris Johnson can lead the UK through Brexit? Let us know in the comments section, below.