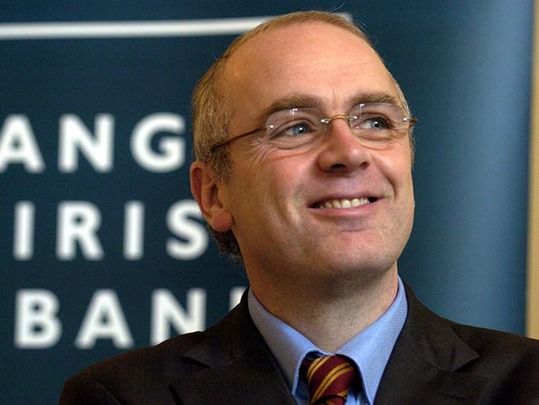 Former Anglo Irish Bank head David Drumm has told IrishCentral in an exclusive interview that he stands behind details of a crucial conversation he had with former Irish leader Brian Cowen in April 2008, despite evidence given to the banking inquiry that appeared to differ with that.

The conversation is at the center of the Irish banking inquiry into how much the then government knew about the accelerating problems at Anglo that helped lead to the financial crash. Cowen has previously stated that no business matters were discussed, but Drumm has contradicted that. Cowen was backed up by former Anglo director Fintan Drury in evidence on Wednesday.

However, Drumm, now based in the US, stated, “I noticed today that Fintan Drury, former bank director, appeared to contradict my evidence (which the banking inquiry leaked) about my conversation with Brian Cowen at the April 2008 dinner. In fact there is no contradiction – the conversation with Brian was one-to-one, he was sitting beside me at the dinner, to my right.

"Fintan is correct when he says there was no 'general' discussion around the table, as it were, about Anglo's issues specifically, but as you would expect there was much discussion about the turmoil in the financial markets and the threats to Ireland from it.

“I stand over the facts of what transpired that night and I have very clear recollection of it, as I was not accustomed to having dinner with ministers, let alone with an incoming Taoiseach.

Drumm went on to point to his written testimony about what occurred. That testimony stated:

“In April 2008 the Board of AIBC held a private dinner with Mr. Brian Cowen, TD, then Minister for Finance and Taoiseach elect. I sat next to the Minister and it was the first opportunity I’d had to speak with him privately. We discussed the difficulties in the financial markets at that time (Bear Stearns failure in mid-March and the ‘St. Patrick’s Day massacre’ when the UK-based hedge funds launched a short selling attack on the Irish banks).

“He fully understood the problems this was causing for Irish banks in the wholesale funding markets. I asked him to intervene with the National Treasury Management Agency, to request that the agency consider increasing the level of deposits they were holding with the Irish banks, rather than with foreign banks.

“I specifically mentioned to Minister Cowen, as an example, that the German Finance Ministry had €200m on deposit with AIBC whereas the NTMA had just €40m with the Bank. Mr. Cowen made it very clear to me that he had already intervened and he was surprised that nothing had been done. This made sense to me as I was present when the matter had been discussed at an earlier AIBC board meeting at which non executive director, Mr. Fintan Drury, undertook to discuss the matter with Minister Cowen. Mr. Drury was an advisor to Mr. Cowen at that time.”