A modest proposal to eat all illegal aliens 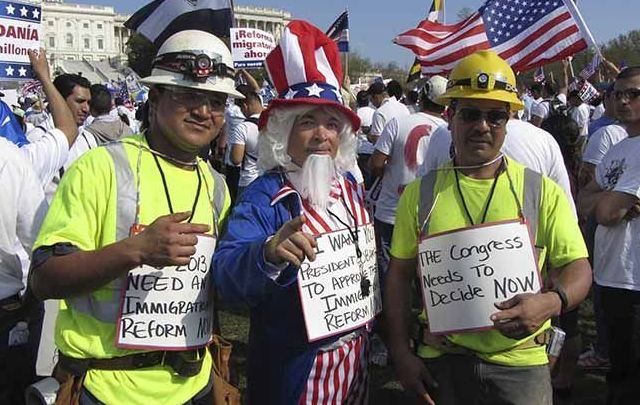 Jonathon Swift's A Modest Proposal eating illegal immigrants the answer for the GOP?

A CNN poll revealed back in 2015 that Republicans favor deporting those illegals already here by 63-34. So do conservatives, by 55-43. “Those already here,” of course, amount to some eleven million people.

No problem. We can just increase law enforcement funding by 10,000 percent and send the tax bill to the average American

As the late Senator John McCain once stated, you would have to catch eleven million people then get legal clearance to deport them. Dog the Bounty Hunter and his ilk would be kept very busy.

Then, as McCain noted, we’d have to rev up buses stretching in an unbroken line from San Diego up to Washington State to fill them all up with illegals and drive them over the border. That’s another super tax bill for GOP tax lovers to pay.

The Republicans also want to build a wall right across the Mexican/US Border. Donald Trump is leading that charge, but the GOP in Congress is racing to catch up and build what someone called a new Berlin Wall.

The Berlin Wall was 97 miles along it had 320 watchtowers and tens of thousands of soldiers rotating to defend it.

Wait there’s more. We’d need about 20,000 watchtowers and massive troops on the ground to keep Pedro and Jose out.

I’m sure the GOP would be only too happy to have taxpayers foot that bill too.

While they’re at it they should immediately propose jail terms on anyone who hires a nanny, a cook, bottlewasher, a home aide, a restaurant delivery worker, a construction employee, a gardener, a landscaper, a painter, etc...Lock up all those law-breaking white folks hiring these dirty immigrants. Search every suburb and let’s have entire blocks where soccer moms are led away in handcuffs.

Then investigate every bar, restaurant, and office. Add a few more tens of thousands of federal officials.

But here’s a better solution proposed once by Jonathan Swift as a way of dealing with the incorrigible Irish ... he was being satirical, I hasten to note.

Eat all the illegal aliens.

Trump could have Latino cookouts literally, in which you could beat up the hombre inside the pinata then roast him.

For Irish illegals Trump could come up with a patented Irish stew of construction workers and nannies. There could be ethnic eat days, Honduran sliced Ham, Mexican meatballs, Belize backside.

Really doesn’t read any more absurd than what GOP headbangers are currently proposing.

How about it Trump, me boy?