Pfizer vaccine will be available in January, says Irish leader

The European Medicines Agency is expected to give the Pfizer/BioNTech vaccine the green light on December 29. 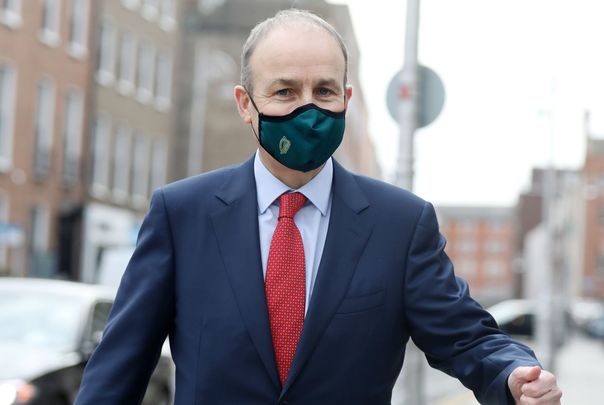 Taoiseach Micheál Martin believes that there will be a larger supply of the vaccine available from March onward. Rolling News

Taoiseach Micheál Martin has said that a limited supply of the Pfizer/BioNTech vaccine will be made available in Ireland in January and February next year.

Martin said that the rollout of the Pfizer vaccine will begin in the week after its expected approval by the European Medicines Agency, which is expected to give the vaccine the green light on December 29.

Nursing home residents and healthcare staff will be the first to receive the vaccine in Ireland, Martin said.

The Taoiseach was speaking to Morning Ireland on RTÉ Radio 1 on Monday morning and said that the Irish Government will announce its plans for delivering the vaccine to Irish citizens on Tuesday.

He said that the Government's rollout plan involves public health teams, doctors, general practitioners, and pharmacists, who will all be consulted about their involvement in the rollout.

Martin told Morning Ireland that the initial supply of the Pfizer vaccine in January and February will be low but that it will be enough for the most vulnerable groups in Ireland.

There will be a much larger supply of the vaccine available in March, April, and May when other vaccines are approved in Europe, according to Martin.

Asked how soon #Covid19 vaccines will be given to vulnerable people in Ireland, Taoiseach @MichealMartinTD says vaccinations will begin within days of approval. The first vaccine may be approved on 29 December. Initial volumes will be low. The "optimal period" will be May-June. pic.twitter.com/MhUTtaA5d3

He said that the optimal period for a vaccination program will be May and June but warned that a vaccine alone was not enough to bring the COVID-19 pandemic to an end.

Instead, he said that the vaccine would complement other efforts to bring the coronavirus under control, arguing that it "will add significantly to our armory in putting pressure on this virus".

He urged people not to let their guard down just because the Pfizer vaccine was on the horizon and said that further COVID-19 restrictions could be introduced in January after a spike in cases on Sunday.

The Department of Health announced 429 new cases of the virus on Sunday night as Ireland's 14-day incidence rate per 100,000 of the population rose slightly to 84.5.

"You could very well be looking at some further restrictions in January," Martin told Morning Ireland.