The 10 feet high wall that separated Springfield Road and Springfield Avenue was built in 1989 in an effort to thwart sectarian attacks and had been there ever since. 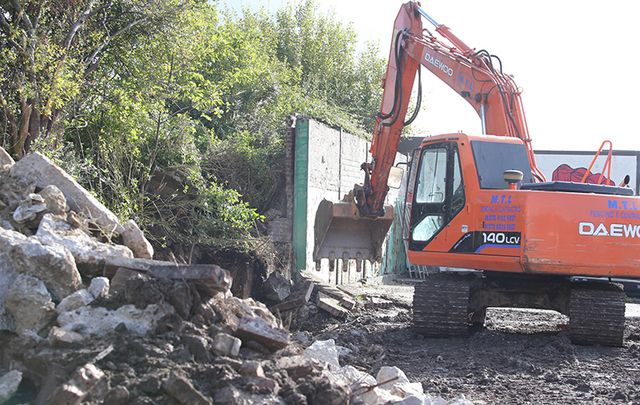 Work has started to remove a security wall that divides Springfield Road and Springhill Avenue. It was erected in 1989 as a security measure to provide extra protection to residents and the nearby New Barnsley police station. Transformation work on the site will include environmental improvements around the land next to two derelict houses and new community artwork. PressEye

After 37 years a towering peace wall between a loyalist area and a republican area in West Belfast came tumbling down yesterday in a further sign of reconciliation in Northern Irish society.

The 10-foot high wall that separated Springfield Road and Springfield Avenue was built in 1989 in an effort to thwart sectarian attacks. It had been there ever since.

After 37 years a towering peace wall between a loyalist area and a republican area in West Belfast came tumbling down. Read more: http://irsh.us/2jNWJH4

Posted by IrishCentral.com on Thursday, September 21, 2017

There are 108 such “peace walls” across Northern Ireland and their removal remains contentious. They sprang up during the Troubles and, whilst bombs and bullets no longer shower down on Ulster as frequently as rain does, many people are skeptical about whether it’s safe to pack them away just yet.

In 2013 President Barack Obama, on a visit to Belfast, made an impassioned plea for the walls to come down. A tentative target of 2023 for their removal was set but few expected ten years to be long enough.

Yesterday’s demolition job came about after extensive consultation with both communities as to whether they would feel safe if the imposing barrier came down.

“The removal of a wall is not a starting point nor an end point, but a significant milestone on the journey towards a positive future.” pic.twitter.com/TgS0Ws0ESj

Activists pushing for cross-community reconciliation were delighted with the news and Seamus Corr, project coordinator for the Black Mountain Shared Spaces Project, told journalists, “The removal of the Springhill Avenue barrier is a significant step forward for the local community... The removal of a wall is not a starting point nor an end point, but a significant milestone on the journey towards a positive future.”

Good to see a "peace wall" in Belfast coming down by mutual agreement. That's progress, however incremental. ☺

The International Fund for Ireland’s Peace Walls Programme contributed financially to the project and its chairman, Adrian Johnston said, “There should be no place for physical separation barriers in a truly reconciled society. While we have not yet reached that stage, the community-led decision to remove this division demonstrates a desire for change.”

Following the demolition of a peace wall on the Crumlin Road in Belfast last year approximately 1.8% of Northern Ireland’s peace walls have been pulled down, whether the remaining 108 will come down before the 2023 deadline is in the hands of the people.