Passage tomb found near Newgrange could be Ireland's next tourist attraction

The discovery of a burial site near Newgrange caused quite a stir in 2018. 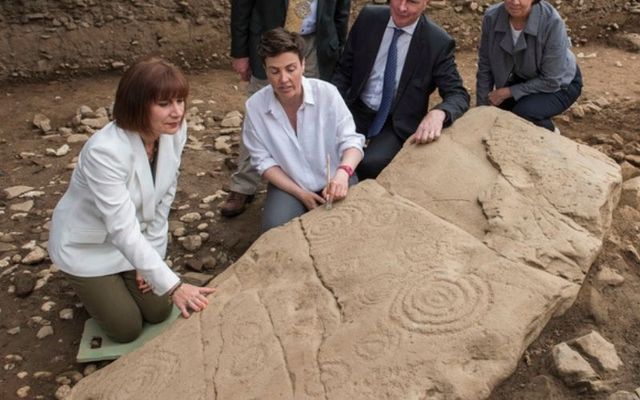 Former Minister for Culture, Heritage and the Gaeltacht, Josepha Madigan (left) at Dowth Hall shortly after the burial site was discovered in 2018. Rolling News

A recently-discovered neolithic burial site near the famous passage tomb at Newgrange could become Ireland's next tourist attraction.

The Dowth Hall passage tomb in the Brú na Bóinne complex in County Meath was only discovered in 2018 during restoration work on Dowth Hall, an 18th-century house that was unwittingly built on top of the burial site.

Although located just a short distance from the famous passage tombs of Newgrange, Knowth, and Dowth, there are no records of the Dowth Hall burial site, with archaeologists working on the dig arguing that there was no local memory of the passage tomb.

Dr. Clíodhna Ní Lionáin of UCD, the lead archaeologist on the dig, said that the monument was probably already destroyed by the time Dowth Hall was built in the 1700s.

"I don’t think the builders came along to a monument that was six, seven meters tall and decided ‘we’re going to put our house on top of this’. They probably came to something that might have looked like a bit of a rise or platform," Ní Lionáin told the Journal.

Archaeologists found the Dowth Hall passage tomb in a state of poor repair when they began excavating the site in 2018. Stones from the site were probably used in the construction of Dowth Hall, researchers said, while the construction of a servant's tunnel at the house actually cut through one side of the burial site.

This caused several orthostats - stones used to make up the tomb's interior walls - to shift from their original position and, consequently, it is unclear whether the tomb was built with an astronomical alignment like the one at Newgrange.

Prior to the COVID-19 pandemic, the site was being excavated by archaeology firm Devenish, who were working in conjunction with the UCD School of Archaeology.

Work on the site has actually been paused since February 2019 due to a combination of paperwork issues and the pandemic and Ní Lionáin told the Journal that there is roughly two or three months' worth of work left to do at the site.

Archaeologists will investigate underneath the collapsed orthostats in the burial chamber and will also carry out further investigations of a small excavated section of the chamber.

The excavations have already yielded some fascinating discoveries; archaeologists uncovered the remains of six people and a hare at the site in addition to numerous cremated remains.

There is a possibility that some of the remains are not from the neolithic period and that they were placed there at another point in history, but the lower jawbone on one of the remains appears to exhibit the same characteristics of other neolithic remains.

Nevertheless, the remains will undergo DNA testing and analysis at the Smurfit Institute of Genetics at Trinity College Dublin to determine who those people were and the position that they held in ancient Irish society.

Stones used to build the burial site will also go under the microscope in an attempt to determine where they came from.

Once the excavation is completed, work will begin to allow the public to access the Dowth Hall passage tomb, according to Ní Lionáin.

Devenish and UCD are keen to ensure some form of public access at the site and don't want to simply cover the site when they have learned all that they can from it.

They are reportedly exploring how they could incorporate the burial site into the reservation of the house at Dowth Hall and could house some of the tomb's intricately decorated kerbstones in protective glass cases.

UCD and Devenish are also considering installing a glass walkway above the burial site, which would allow visitors to look down on the tomb, although it will be a long time before that idea becomes a reality.