Irish Olympian Kevin Babington was paralyzed after a riding accident in 2019. A new stem cell treatment at the Mayo Clinic offers hope that he may be able to walk again. 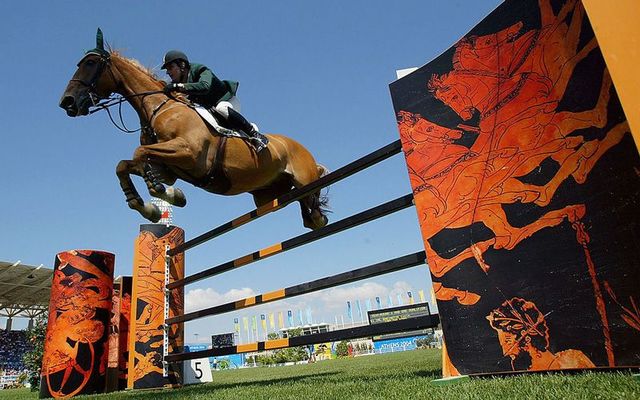 An Irish Olympian show jumper who was paralyzed after a riding accident finds hope in a promising new stem cell treatment.

On August 30, 2019, equestrian Kevin Babington, now 52, was flung from his horse, Sholapur, at the Hampton Classic, a horse show in Bridgehampton, NY. He hit the ground headfirst, severely bruising his spinal cord. and was paralyzed from the chest down.

“How he didn’t get killed is a miracle. He should have broken his neck. But instead of the neck actually breaking, he tore all the ligaments in it. The bones didn’t break but instead he had what’s called a stretch injury of the spinal cord and a contusion of the spinal cord at C3 and C4," Babington's wife, Dianna, told The Irish Times last year, from the couple's home in Florida.

“It’s basically a bruise of his spinal cord. You are far better off breaking bones than bruising the spinal cord. Essentially, his vertebrae bounced off the spinal cord and created this huge swelling. The bruising and stretching have caused damage within the cord.”

Since the accident, he has undergone multiple surgeries, rehabilitation and therapy. He endures grueling, intense exercise sessions daily.  Babington says his body is slowly healing.

He told Horsetalk last June: “I’m working hard on my rehab and now have a good bit of movement in my right arm, almost to the point where I can manage the wheelchair with my hand, and I have twinges in my legs which the doctors call a good spasm. The C3 and C4 vertebrae affect your diaphragm, and I was on a ventilator for quite some time at the beginning. I’m off that for months now so my voice and my lungs are getting stronger.

“But it’s slow. I still have to deal with a fair amount of pain in the form of spasms, and unfortunately, the physio practice I go to has been closed because of the virus but I’m really looking forward to getting back into that. I ride a stand-bike every day to keep my muscle tone up and do lots of exercises working on my strength."

Babington was born in Ireland, the youngest of 11 children, to a wool merchant and politician. He took his first riding lesson at age 11, and moved to the US in 1987 to work as a riding instructor at a Vermont summer camp.

He was a member of the Irish gold medal team at the European Championships in Holland in 2001. He finished eighth individually at the 2002 World Equestrian Games in Jerez, Spain, and fourth in the 2004 Athens Olympics.

Babington is also one of the top coaches in equestrian sports.  Since the riding accident, he has been able to continue coaching on a limited basis from his wheelchair wearing a wireless headset, and, because of the pandemic, he also conducts lessons on video calls.

Babington believes he will not only walk but also ride a horse again.

“My long-term goal is to be able to walk. I’d love to be able to walk or ride. I’m just over a year now since the accident and they tell me that I’m still only in the short term," he told The Irish Times in September. "It feels like a long time to me but they’re used to working with people who show up two to three years into their accident. A lot of people have told me it could take two to three years for the inflammation around the spine to go down.

“I do have goals. I’m trying to be realistic about not setting a timeframe that is out of the question. Would I love to be able to walk next month? Of course I would. Is it realistic? Probably not.”

The greatest hope for his recovery is his participation in a clinical trial involving stem cell injections at the Mayo Clinic in Rochester, Minn., the NY Times Post reports.

Last year, a man who was paralyzed from the neck down in a surfing accident was able to walk again after the treatment.

Babington is also looking for that miracle recovery.

“It’s something to look forward to,” he said. “I’ve always tried to take things in stride, and I think I’ve handled the stress well. I definitely am feeling stronger all the time.”

Dianna is awed at her husband’s ability to push himself past normal limits. She said he has the resolve on an Olympian.