Paralysis fears for top Irish rider after fall from horse

An Irish Olympic show jumper severely injured his spinal cord after falling from his horse while competing in the Hampton Classic Horse Show. 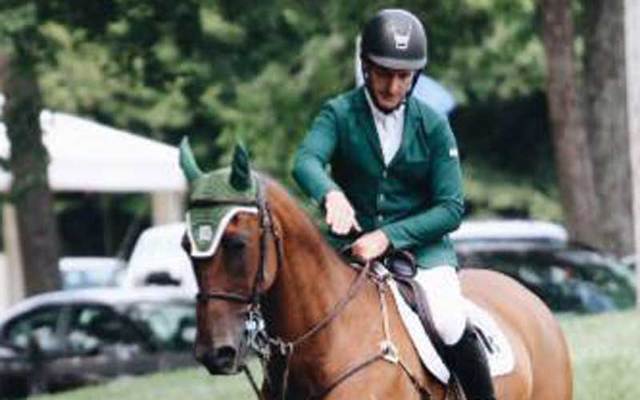 An Irish Olympic show jumper severely injured his spinal cord after falling from his horse while competing in the Hampton Classic Horse Show last week.

Kevin Babington, 51, fell off his horse, Shorapur, during the Grand Prix qualifying round of the elite riding competition in Bridgehampton on August 30, reports Newsday.

On Tuesday, Babington underwent a five-hour surgery at NYU Langone Medical Center to stabilize the bones in his neck. It is not yet known if he will suffer permanent paralysis.

Babington’s wife Dianna told Newsday: "My husband is the best of humanity. He abhors suffering of any kind. I can't get my head around this. But bad things happen to good people."

She added: “Kevin is a fighter. We are hearing stories of all kinds of treatment and people who walk again after these kinds of injuries. There is hope."

Kevin was born in Ireland, the youngest of 11 children to a wool merchant and politician. He took his first riding lesson at age 11, and moved to the US in 1987 to work as a riding instructor at a Vermont summer camp. He then accepted a full-time riding position at Chado Farm, in Neshanic Station, New Jersey.

In 2001, he was part of the Irish gold medal team at the European Championships in Holland. Babington finished eighth individually at the 2002 World Equestrian Games in Jerez, Spain, and fourth in the 2004 Athens Olympics.

Kevin met Dianna, an amateur rider, at a horse show in Pennsylvania. The couple have two daughters, Marielle, 13, and Gwyneth, 16.

"I never imagined anything like this could ever happen," said Dianna. "This is just about as bad of an injury as could happen."

She added: “If there is anyone who is going to fight through this it's Kevin. He is a fighter. He is an athlete. He is a champion."

The family recently moved from Pennsylvania to Florida, and since the accident have been sleeping in a hotel in Manhattan.

Babington does not have disability insurance and the medical bills are mounting. Friends have started online fundraisers to help the family.

"These are kind people who selflessly did for others and now need our help," Gilbert wrote in the online fundraising pitch. "Kevin is a humble man of humble means, who rides for a living and has spent his entire life helping other people and animals."