Paddy Moloney, founder of The Chieftains, was remembered for letting "his music do the talking" during his funeral on Friday, October 15. 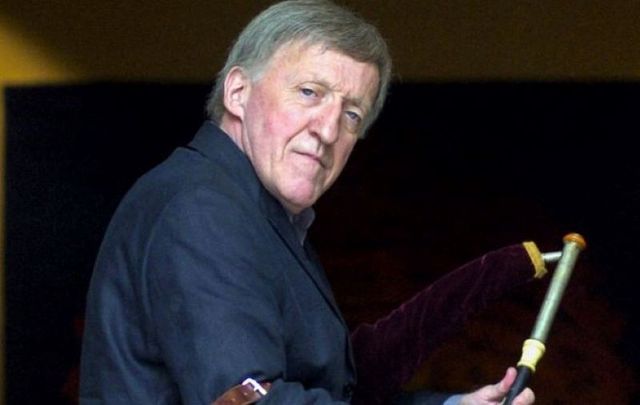 August 2004: Paddy Moloney on the steps of the National Concert Hall. RollingNews.ie

A funeral service for Paddy Moloney, 83, was held at St. Kevin’s Church in Glendalough, Co Wicklow on Friday, October 15.

Moloney, one of the founders of the Grammy-winning Irish band The Chieftains, passed away "suddenly" on Tuesday, October 12.

His death notice on RIP.ie reads: "Beloved husband of Rita and devoted father of Aonghus, Aedín, and Pádraig. Father-in-law to Áine and Anne and adored grandfather of Ciarán, Aonghus, Fionn, and Mieke. Sadly missed by his sister Sheila and all his nieces and nephews; his long-time friends in The Chieftains and the wider music community."

A native of Donneycarney in north County Dublin, Moloney and his family had made Annamoe in Co Wicklow their home for many decades.

Among the mourners at Friday’s service were President of Ireland Michael D. Higgins and his wife Sabina.

Providing music for the funeral service were current and former members of The Chieftains Matt Molloy, Seán Keane, and Michael Tubridy, who were joined by uilleann piper Gay McKeown, Galician piper Carlos Núñez, and fiddle player Tara Howley, according to The Irish Times.

Moloney “touched lives all over the world,” parish priest Fr Eamonn Crossan said during the funeral on Friday. Indeed, Moloney is credited with helping not only save traditional Irish music but bring it to a global audience.

During his homily, Fr Crossan painted a picture of what a heaven with Paddy Moloney might look like: “We don’t know much, but the Bible tells us there will be music there.

“Paddy will be there, making music. Maybe Ronnie Drew will be in one corner, Luke Kelly will be in another - he might be singing Raglan Road. Kavanagh would be saying ‘You didn’t get it right there, Luke, you missed a line!’ And Peter would be saying, ‘Keep it quiet, lads, you’re disturbing the angels.’

“It will be wonderful.” 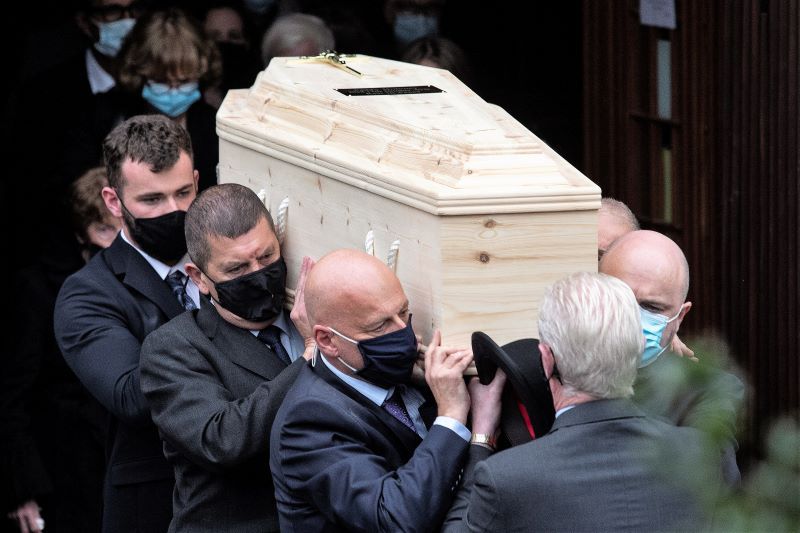 At the end of the service, Moloney’s son Aonghus took to the pulpit to thank all those who assisted the family over the previous week.

“A special thanks to The Chieftains,” Aonghus said. “Paddy would always have wanted that they have the final note.”

Aonghus joked: “Now, Paddy, you opened to a million people for the Pope, you opened for The Rolling Stones, and last Tuesday, on RTE, you opened for the Budget. I’m sure you would have been pleased to think Paschal and Michael had to wait for your announcement to be done before they stood up and address the house.”

Mick Jagger, frontman for The Rolling Stones, offered his condolences on Moloney’s passing on Twitter the day before the funeral:

Sad to hear of Paddy
Moloney’s passing -
the greatest uilleann
piper on the planet.

Aonghus continued: “Paddy’s life was The Chieftains, music was his life. He lived for that moment when he would walk out on that stage and say, ‘I’m Paddy Moloney from Dublin, Ireland, the greatest city in the world.’

“He never went anywhere without his win thistle, as he called it, and always let his music do his talking.

“We remember as children Paddy’s love of touring around the world playing to new audiences. When he took a break, he’d find himself at home at the dinner table - or monkey’s tea party, as he called it - where he couldn’t get a word in edge-wise. Any attempt to tell us that he just met the Pope, or played with superstars around the world, was quickly drowned out. We were definitely his toughest audience.”

Aonghus went on to share Paddy’s love for his four grandchildren, as well as the more than sixty years of devotion to his wife Rita.

He concluded: “Our dad loved doing what he did. In March last year, COVID brought about abandoned and then canceled tours, and for the first time in 70 years, Paddy Moloney couldn’t play music to an audience.

“Paddy died last Tuesday, but with the thing he loved most taken away from him, Paddy’s life faded from last March.”