The unusual white-shelled lobster has taken up a new home in the island’s aquarium and is awaiting its new name. 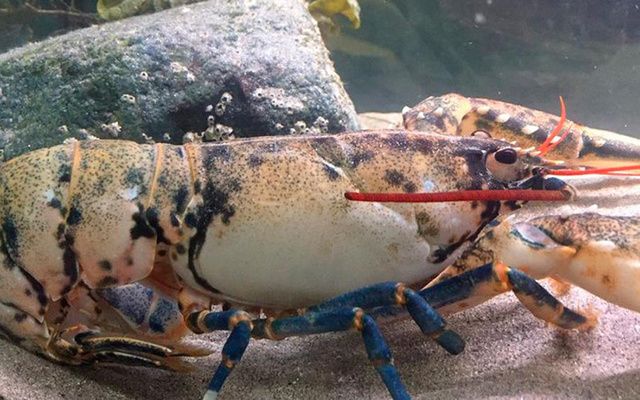 One County Mayo fisherman came across the catch of a lifetime off the coast of Achill Island this week, just days after the magical reappearance of a long-lost beach on the Irish island.

Fisherman Charlie O’Malley landed an extremely rare white lobster in his pots in the waters off the Mayo coast. He was astounded to see the somewhat mythical creature that he had only heard stories of during his 26 years as a fisherman.

Although not completely white, these lobsters are far from the dark inky color of their more common red cousins and are believed to be extremely rare in Irish waters.

The explanation for their color is not quite as magical and wondrous, however, as it’s simply caused by a genetic mismatch that changes up the color of their shells. This occurs in fewer than one in a million cases. These crustaceans suffer from an absence of a chemical compound called astaxanthin which results in their rare white crusts.

This is the second time in the space of a week that the eyes of the world have focused on Ireland’s largest offshore island.

The exotic lobster was caught a short distance the beach at Dooagh which magically reappeared in the past few weeks after having been lost to the ocean since 1984.

Read more: Washed away Irish beach reappears for the first time in 33 years

You can find more shots from the incredible long-lost beach in our video below:

Once a favorite of locals and tourists alike, the beach was washed away during several big storms in 1984, leaving just rocks and rock pools.

In April 2017, however, a freak tide began to dump sand back on the site of the original beach in Dooagh resulting in the recreation of a 300-meter beach along the Achill coast.

The storm “took every last grain of sand,” explained Sean Molloy of Achill Tourism, but that over the course of eight to ten days in April, strong winds from the north return what they had once taken.

"Apparently what that does is, it blows the surface water back because this is a south-facing beach. The sea then takes the sands underneath and brings the sands up. That's what I've been told,” he told CNN.

The return of the golden strand is a massive win for the island, which has fewer than 3,000 inhabitants, and the tourism industry on which it relies.

Although the new guest lobster has not yet been named, it has happily set up home in the local aquarium, The Achill Experience, opened in 2016 to show off the best of Achill Island’s maritime life.

Rare white lobster takes up residency in aquarium on Achill Island after being discovered by local fisherman pic.twitter.com/6HHPzpdvrU

The albino lobster is believed to be still quite young, ranging between three to four years, whereas lobsters can live up to 45 to 50 years in the wild.

Terence Dever from The Achill Experience told Mayo News they were at first unaware of just how significant the find was until the Maritime Institute explained the rarity of finding such a creature in Ireland. He now believes that the aquarium's new guest will be a big pull for visitors from the rest of Ireland and beyond.

“This new guest will mesmerize and amaze many visitors to Achill, particularly children who are only developing their understanding of marine life. I have to say this will rocket our numbers to the aquarium and to Achill for this coming season and for many seasons to come,” he said.

The center opened in 2016 and has welcomed 18,500 visitors during its first year and with plans to expand the county’s new aquarium in 2018.

Tourists are told the beach is a perfect place for a stroll, and tourists are rushing to view the magical escape-artist of a beach, but locals advise people not to venture into the water just yet as it’s unknown to what extent the strange tides are still at play.

Could it be possible that the very same tide that brought in the beach’s sand could have brought along the island’s latest visitor along with it? We always thought there was magic to Achill and if that’s true, should we be expecting a third miraculous appearance or reappearance on the island?

Have you ever visited Achill Island? Have you any recommendations for a name for the lobster Tell us about your adventures and name ideas in the comments section below?