The red facade of the Olympia Theatre in Dublin is set to get a makeover as part of the new Three Ireland sponsorship deal. 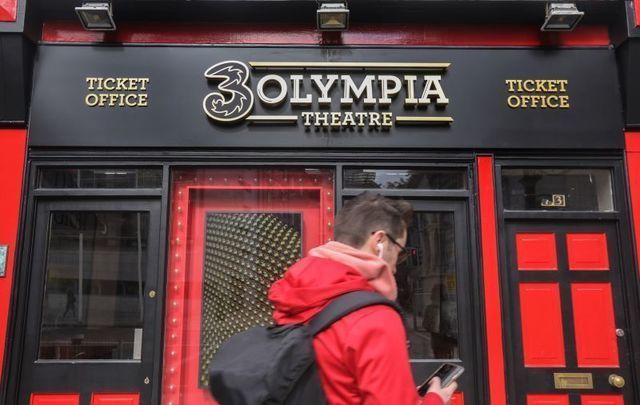 September 16, 2021: The new logo for the Olympia Theatre in Dublin, which has controversially changed its name to the 3Olmypia Theatre after a sponsorship deal with mobile operator 3. Rolling News

The Olympia Theatre's iconic red facade is to be repainted gray as part of a sponsorship deal with mobile provider Three Ireland, which entered into an eight-year deal with the theater last September.

Olympia Productions Limited submitted plans to Dublin City Council on February 7 seeking permission for "new pediment signage" and a "replacement shopfront" for the theater, which is located at 73 Dame Street.

The plans also call for the repainting of decorative paneling and the construction of a new glass-paneled window with an LED advertising screen.

The Business Post reports that the plans will see the venue's iconic red frontage "overhauled and painted gray".

The proposals are still categorized as a live planning application, meaning members of the public can submit observations until March 14.

Dubliners took to Twitter to voice their opposition to the plans over the weekend.

"Dublin is being destroyed in front of our eyes," one Twitter user said.

"This is awful. Maddening. Nothing worth preserving anymore it seems," said another.

The iconic Dublin theater was controversially rebranded as the 3Olympia Theatre last September in an eight-year sponsorship deal.

Caroline Downey, the owner of the Olympia Theatre, said at the time that the sponsorship deal would allow the venue to survive following 18 months of closures during the Covid-19 pandemic.

"The past 18 months has been difficult for the live entertainment industry and the investment of Three in this new partnership is more important than ever in supporting the venue to reopen its doors once again," Downey said in a statement in September.

Three Ireland also sponsors the 3 Arena in Dublin City in addition to a multitude of festivals and concerts held throughout the country.