These ancient rocks off the coast of Co Donegal, thousands of millions of years old, are where "the story of Ireland begins." 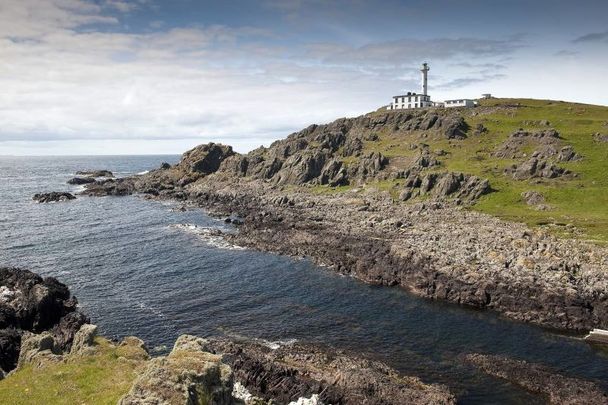 Inishtrahull, an island off the coast of Co Donegal, has the oldest rocks in Ireland, according to one scientist on the new RTÉ One series “The Island.”

In the debut episode of the new Irish series "The Island," presenter and biologist Liz Bonnin speaks with Dr. Brian McConnell of Geological Survey Ireland about the Donegal island which has rocks that date back some 1.8 billion years.

“This is the oldest part of Ireland,” Dr. Brian McConnell tells Bonnin while on Inishtrahull in the debut episode, entitled "Land," of the three-part series.

“These rocks are 1,779 million years old, nearly 1.8 billion, which is an unimaginable amount of time in the human time scale.”

Inishtrahull, about about 10km off of Malin Head and the most northerly island of Ireland, was once a thriving inshore fishing community, according to What's On Donegal. While the island saw an almost 100% population increase between 1881 and 1901, a combination of factors in the early 1900s compelled islanders to evacuate; no one lives on the island today. The island is now designated a Special Area of Conservation and a Special Protection Area by Ireland's National Parks and Wildlife Service.

Elsewhere in the show's debut episode, Bonnin learns about the Iapetus Suture in Clogherhead, Co Louth, which, as Irish geologist John Walsh explains, is "probably the most formative thing in Irish geology."

"We've had a collision. So the north and south of Ireland have collided with each other and all these layers deposited in a deep ocean ... they've all been squeezed and folded and we're looking at, I suppose, we're effectively looking at the collisional smoking gun."

Folding adjacent to the Iapetus Suture from Clogherhead. Check out 'The Island' on RTE1 at 6.30pm tonight (11th), or alternatively BBC2NI at 10pm on 18th September. 😊 https://t.co/HAwGETQM8U

Ahead of the premiere of the "The Island," Bonnin told RTÉ: “I don’t think I could ever have imagined just how much the island has gone through since its first rocks formed 1.8 billion years ago, on the other side of the planet. Just how many different climates, ice ages, collisions, and intense volcanic episodes it has survived - and that’s just the half of it!”

She added: “It’s incredibly humbling to understand the extent of geological activity that has gone into the formation of our home, as you stand on its weathered rocks and think about its history.”

📺👀Excited to share a sneak peak at the promo for our fab new series #TheIsland that starts next Sunday 11th Sept, 18.30 on @RTEOne!! 🙌The story of Ireland’s epic geological journey spanning 1.8 billion years with @lizbonnin 🌍🌋🇮🇪🌊🏝️@GeolSurvIE @NewDecadeFilms pic.twitter.com/lTg85UAwXd