O'Neill confirmed New York subway bombing was terrorism, a 27-year-old man was arrested and three people have been injured. 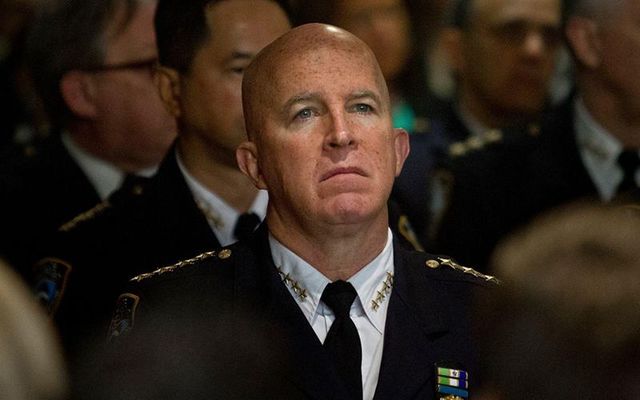 O'Neill confirmed New York subway bombing was terrorism, a 27-year-old man was arrested and three people have been injured

Police Commissioner James O'Neill says the device that exploded in the New York City subway was a terror-related incident.

A 27-year-old man had a crude pipe bomb strapped to him and it went off in a passageway from Seventh and Eighth Avenues near Times Square.

Three people suffered minor non-life-threatening injuries. The suspect was also injured and was taken into custody.

Mayor Bill de Blasio says the device that exploded in the New York City subway was an attempted terrorist attack. He says it's lucky the suspect didn't achieve his ultimate goals.

Law enforcement officials say he was inspired by the Islamic State, but had apparently not had any direct contact with the terror group.

Police on the scene this morning at the NYC Bus Authority.

The New York Police Department responded to reports of an explosion at 7.30am at the Bus Authority, the city’s main bus terminal. A bomb squad was dispatched, and it’s been reported that a possible pipe bomb was detonated in an underground passageway, according to ABC News.

Police have taken one man into custody, who was carrying a pipe bomb with a battery back, a source told the New York Post.  It is not yet clear if anyone has been injured. CNN reports that the bomb detonated prematurely, injuring the suspect.

Update regarding explosion at 42nd St and 8th Ave, in subway: One male suspect is in custody. No injuries other than suspect at this time. Avoid the area. Subways bypassing #PortAuthority and Times Square Stations. Info is preliminary. pic.twitter.com/bEAdjq8mYc

The New York Port Authority Bus Terminal is the largest in the United States and serves 65 million people per year. The bus terminal is a major transit hub for people commuting to and from New Jersey by bus, and is located just a block from Times Square.

CNN reports that it appears the Subway was not the intended target of the pipe bomb, and that it may have went off prematurely. They also reported that the device was homemade and could have caused disastrous damage if it had gone off as intended.

UPDATE FROM THE SCENE: Sister station @NY1's @joshrobin with the latest on the explosion at or near the NYC #PortAuthority Bus Terminal. The #NYPD has the suspect in custody and are investigating. pic.twitter.com/dLOejWUo5H

NYPD report one suspect in custody, at least one injured, major disruptions to Subway, with possible “second device” suspected

A terrorist attack at New York City’s Port Authority Bus Station, at 44th Street and 8th Avenue, has left at least one person injured after “some type of explosion” went off inside the subway.

The New York Police Department have a suspect in custody found with a “possible second device”.

A witness described him as “having wires coming out of him.”

Mayor de Blasio and President Trump have been briefed on the incident.

No word yet as to whether any Irish are hurt or involved in the police action.