Thirty-five thousand Irish Americans are expected back on the old sod for a Notre Dame versus Navy season-opening game scheduled for August 29, 2020. 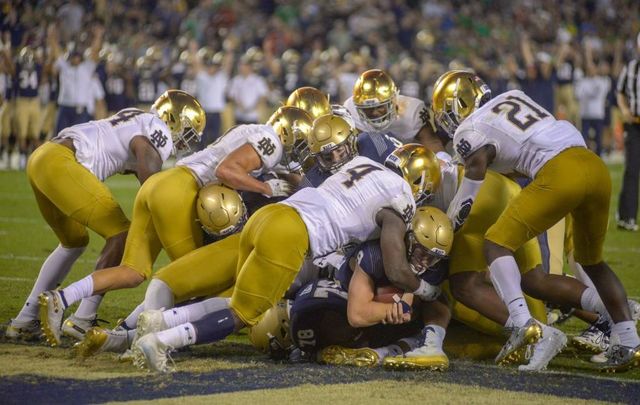 Zach Abey #9 of the Navy Midshipmen carries the ball across the goal line scoring a touchdown in the 2nd half against the Notre Dame Fighting Irish at SDCCU Stadium on October 27, 2018, in San Diego, California. Kent Horner/Getty Images

The first in a planned annual series of five, the Notre Dame vs Navy game in Dublin in 2020 needs to lay good groundwork for future American football events in Ireland.

Thirty-five thousand Irish Americans are expected back on the old sod for a Notre Dame versus Navy season-opening game scheduled for August 29, 2020, at the Aviva Stadium in Dublin and if all goes well, this first in a planned annual series of five could result in a $70,000 annual injection into the Irish economy.

Making the announcement last October 2018, the Irish government revealed that American Football Series will bring a $250 million economic value to the country, with Irish airline Aer Lingus unveiled as the title sponsor for the series. All five games will be played in Aviva Stadium, starting with the Navy-Notre Dame game. The classic will be called The Aer Lingus College Football Class.

The games will be organized by Irish American Events Ltd., which is a joint venture between Corporate.ie and Anthony Travel, which have been involved in college football games in Ireland previously. 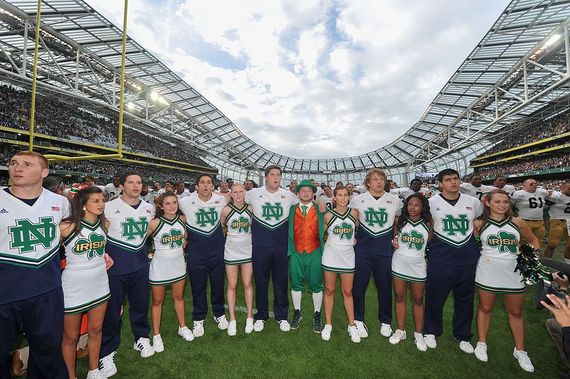 The cheerleaders and support staff of the Notre Dame team celebrate after the Notre Dame vs Navy game at Aviva Stadium on September 1, 2012 in Dublin, Ireland. Notre Dame won 50-10. (Photo by Barry Cronin/Getty Images)

The other key partners who will drive the game in both Ireland and America are Fáilte Ireland, Tourism Ireland and Dublin City Council.

As reported by the Irish Times, Glen Dimplex executive chairman Neil Naughton, who chairs the steering committee for the series, was recently interviewed in Notre Dame ahead of the Fight Irish’s game against New Mexico State.

“The 2020 game is not about bringing the drama and pageantry of the gridiron to an Irish audience,” Naughton said.

“It’s about our two great nations engaging together. As well as the game, there will be academic conferences, cultural events, business opportunities... and you can bet there will be social activities, too.

“We’re hoping Notre Dame fans will get to experience Ireland, to love it. And in the future, they will see Ireland as their second home. And if they’re in business and they want to open a European office, Dublin will be their natural choice, or Cork or Galway or Belfast.”

The last game in Ireland between Notre Dame and Navy was in 2012 and resulted in the largest ever convoy of Americans to visit Ireland as Notre Dame followers traveled in their tens of thousands. The Navy fans also traveled in the thousands with the Navy Midshipmen coming from all over the world. 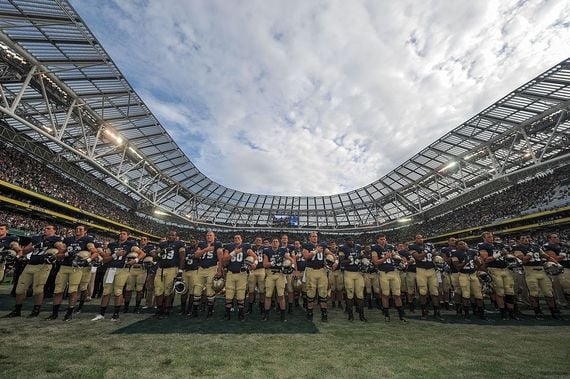 The Navy team after the final whistle of the Notre Dame vs Navy game at Aviva Stadium on September 1, 2012 in Dublin, Ireland.(Photo by Barry Cronin/Getty Images)

The same is hoped to be repeated in 2020 with Notre Dame’s strong links to Ireland setting the tone for future games. By 2021, the teams involved will have no exact Irish links but there are still hopes to bring at least 20,000 fans to the Emerald Isle from the US for the event each year. It is also hoped that by 2021, sports fans in Ireland will rally around the series to sell the extra tickets left empty by a smaller traveling US crowd.

“Each one of these games equates to the biggest movements of US people abroad for a sports event,” Michael D’Arcy, Minister of State at the Department of Finance, told the Irish Times.

“But the US visitors are coming for more than sport. They want to do the Wild Atlantic Way. They want to make business connections, forge friendships. And some will want to reconnect to their Irish roots. That’s a hugely powerful addition to the strength of the Irish diaspora.”

Do you plan on traveling to Dublin for Notre Dam v Navy 2020? Let us know in the comments section, below.