Nazi death camps held 50 Irish it has been revealed, only 28 survived

Irish seamen who refused to work for the Nazis after being captured were sent to German death camps. 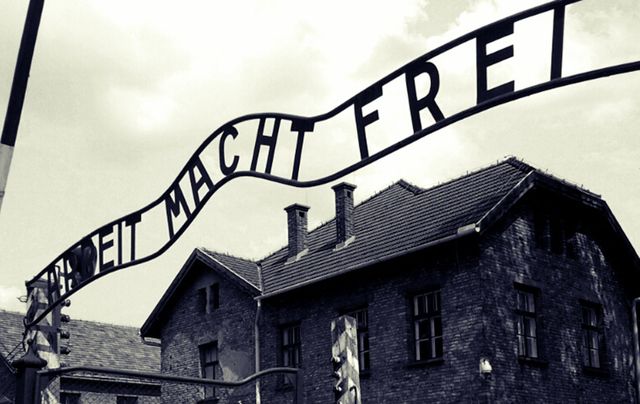 A sign reading "Arbeit macht frei" ("Work sets you free") hanging above the entrance to Auschwitz.

Irish seamen who refused to work for the Nazis after being captured were sent to German death camps, it has been revealed. All in all, fifty Irish were captured at sea on British ships during the war. Only 28 survived the concentration camps.

The number of Irish who were inmates in German death camps was considered very low but this new evidence changes that version of history.

Files at the National Archives in Kew, west London, show the men were recognized for outstanding bravery and given compensation by the British government.

32 of the Irishmen ended up in the notorious Bremen-Farge concentration camp where prisoners were literally worked to death until their release at the end of the Second World War.

The Irishmen wrote about “harsh" conditions, food that was "atrocious in quality and quantity" and punishing 12-hour days of hard labor.

The treatment of these civilian seamen was truly horrific, as recounted by the relative of William Knox from Dun Laoghaire in Dublin, one of those who died:

“Throughout their captivity, the Irish seamen consistently refused to sign an agreement to become freie Arbeiter – voluntary workers for the German Reich. In early 1943 they were again segregated, and thirty-two of them including William were moved by the Gestapo to Bremen Farge. This was one of seven satellite labor camps attached to the large concentration camp at Neuengamme in northern Germany.

According to the survivors, the Irish were beaten by SS guards when they arrived at Farge. They were told that, since they were civilians, they were not protected by the Geneva Convention, or the International Red Cross. Their new accommodation was a disused fuel tank buried beneath several meters of solid concrete.

The 32 Irishmen joined more than 10,000 other slave laborers – mainly Russians and Poles – who were working on Project Valentin. This operated on a 24-hour-shift system, with each shift lasting for at least 12 hours. There was one half-hour meal break for soup and black bread: the bare minimum required to keep prisoners alive.

According to the survivors, the Irish seamen were assigned to some of the hardest work. Usually, this involved lifting, carrying and emptying heavy bags of cement. The prisoners would inevitably inhale some of the dust during the day, and hack it up in wet balls during the night.”

An account of their release appeared in the Irish Times on the May 17, 1945:

Account by Irish survivors appeared in the Irish Times, May 17 1945.

The story read: The experiences of thirty-two citizens of Eire, all merchant seamen, in an S.S. camp in Germany, where five of them died from starvation or typhus, were described yesterday to an "Irish Times" reporter by William English, of Arklow, one of the thirty-two, who has just arrived in Dublin after his liberation.

He said the camp was at Bremen Farge, outside Bremen, and that the camp commandant -- named Schauwecker -- a month ago, shot sixteen prisoners after announcing that he knew he would be shot or hanged by the Allied armies, and he "would take as many as he could with him."

Read more: My family's Holocaust story recalled for the Irish at Limerick

Mr. English saw a naked Belgian prisoner beaten to death with a rubber hose for attempting to escape. A Pole was shot in the thigh while trying to escape, and the S.S. guards rubbed salt into the wound and beat him with electric cable. He walked from the end of the camp to the hospital, but a Russian doctor, also a prisoner, was refused permission to attend him, and gangrene set in. The doctor said it would be more merciful to shoot the man. The guard did so. Next morning a French prisoner who refused information was shot.

A Russian prisoner was thrown into the camp refuse heap and Schauwecker forced some of the muck from the heap into his throat with a wire before throwing him back on the heap. He was struck with a rifle butt on the head and killed. His body was left for three days on the heap.

According to the Wild Geese blog, Mr. English said that he was a seaman on the Blue Star liner, S.S. Africa Star, and in January, 1941, while they were bound from South America to London, they were intercepted by the German surface raider, Steinmark, which took the liner's crew aboard and then sank her. The men were taken to Bordeaux and sent to Germany to camp Stalag XB, 10B Sandbostel.

The prisoners whose homes were in Eire were segregated and questioned by German intelligence officers and urged to work for Germany. They all refused.

In September 1941, about fifty Irishmen, all seamen, were taken to Marlag, Milag Nord, another camp, and thirty-two of them were sent to Bremen Labor Exchange. They were brought to a factory and again refused to work.

Their guards suggested to them that, being Irish, they ought to work against Britain in the war. They refused.

They were taken to Hamburg and asked to work on German ships, but again refused, and they were returned to Bremen Farge.

In the camp they worked 12 hours a day, mostly at carrying rail tracks. Russian girls, aged from 16 to 18, were doing the same kind of work. In Bremen, Jewish girls of from 15 to 18 worked in demolition squads.

One of the Irishmen, Patrick O'Brien, who later settled in Glasgow, said: "Punishment was severe and meted out for the smallest or no misdemeanor.

"The reason for my imprisonment was my refusal to work on the German railway at Bremen and refusing to work on German ships at Hamburg.

"They claimed I was an Irish national and was therefore a free civilian, a claim which at no time I had ever made."

His colleague James Aldous Furlong, who was born in Wexford also suffered greatly. He wrote: "For refusing to work for the Germans I was sent to Farge SS Camp as a punishment and it was a punishment place, I have seen people being flogged to death and shot and was always afraid my turn would come one day.

"Food was bad, accommodation very bad and there was syphilis in the camp and people were dying all over the place.

"However, I came through alright but I am crippled now with rheumatic."

The surviving men were initially awarded £1,000 in compensation, but were subsequently handed another £1,385 after their release by the British government.

One of the men, Michael O’Brien of Limerick returned to mainland Europe and testified against the Nazis in a special criminal court.