Ireland's National Famine Commemoration was hosted in Dublin after the planned event in Buncrana, Co Donegal was deferred to 2021 due to coronavirus. 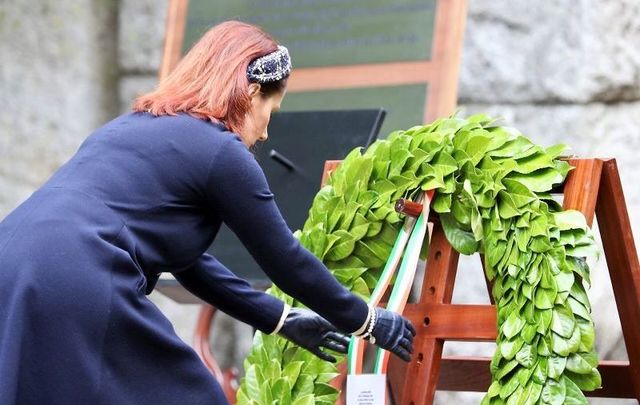 Minister for Culture, Heritage and the Gaeltacht, Josepha Madigan TD officiates at the National Famine Commemoration Ceremony in St. Stephen’s Green, Dublin on May 17, 2020. RollingNews.ie

Ireland’s National Famine Commemoration was hosted at St. Stephen’s Green in Dublin on Sunday, May 17. The event was due to be hosted in Buncrana, Co Donegal this month but was deferred until 2021 amidst the coronavirus crisis.

In accordance with current health and safety guidelines, this year's National Famine Commemoration ceremony was not open to the public. 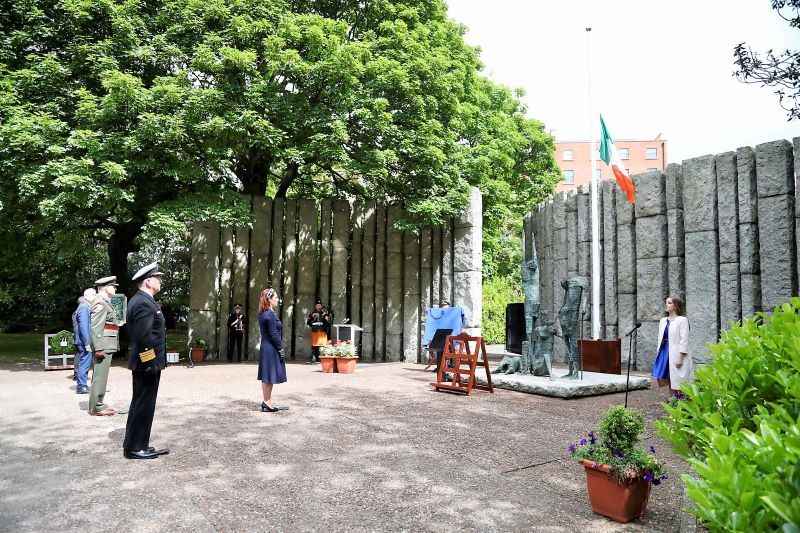 Minister for Culture, Heritage and the Gaeltacht, Josepha Madigan T.D. officiates at the National Famine Commemoration Ceremony in St. Stephen’s Green, Dublin, on May 17, 2020 (RollingNews.ie)

The ceremony included military honors and a wreath-laying ceremony in remembrance of all those who suffered or perished during the Famine. Wreaths were laid by Minister for Culture, Heritage & Gaeltacht Josepha Madigan on behalf of the Irish People and by the Dean of the Diplomatic Corps on behalf of the Diplomatic Community. Aimee Banks sang Brendan Graham’s Crucán na bPáiste, and the National Anthem was performed by an Army Piper.

Minister Madigan unveiled a plaque marking the first Annual Famine Commemoration held in the Custom House in 2008. This will be installed on the grounds of the Custom House later in the year.

Officiating at the National #Famine Commemoration in Stephens Green this morning. Today our thoughts are with those who suffered during #AnGortaMór and those who came through those terrible years.

Read More: Coronavirus is Ireland’s greatest challenge since the Famine

Speaking at Sunday’s ceremony, Minister Madigan said: "When we look back on those years, our thoughts cannot but turn to those who suffered. We think of the people who lost their property, their homes, their families, and sadly, in so many cases, their lives. We gather each year to pay respects to their memories.

"However, we also remember and pay tribute to those who survived and came through those terrible years, either here in Ireland or on foreign shores among the great diasporas formed by those years.

"We also salute their courage and resilience, taking pride in their achievements which echo down the generations.

"This year, as we stand before this powerful structure by Edward Delaney, we think particularly of the heroes of the Famine years, those individuals and groups who, when faced with the enormity of the disaster enveloping their neighbors, did not turn away, but sought to help.

"The Great Famine, and its associated legacy of disease and suffering, did not respect differences in religion, or geography, or class. However, as we look back on that terrible time, we can also recognize that the basic human urge to reach out to help those in need also transcended boundaries.

“In her poem ‘Quarantine,’ the late Eavan Boland movingly evoked the efforts of a loving husband to support his wife with the last of his strength, when she said:

“She was sick with famine fever and could not keep up.

He lifted her and put her on his back.”

“The heroes of the Famine that we honor today also sought to lift and carry those who fell or could not keep up. That same spirit of caring and self-sacrifice that is embedded in the caring professions is being seen again today as our health workers embrace the challenge of caring for those affected by Covid-19. We honor and respect these modern-day heroes and value their courage.

“Perhaps we can best show our appreciation for their work, and the efforts of their forebears during the Great Famine, by adhering to those small acts of heroism we are called upon to perform in the response to the Covid-19 pandemic, and to come though these testing times, just as our ancestors once did.”

You can watch the RTE News report on Sunday’s commemorations here:

Wreath laid to remember those who died and suffered during Famine

The annual National Famine Commemoration ceremony was held in Dublin today, without any members of the public in attendance because of Covid-19 restrictions | Read more: https://bit.ly/3cH0yoL