The funeral for John Mullan and his two children Tómas and Amelia was held on August 24 in Moville, Co Donegal after they were killed in a tragic road accident. 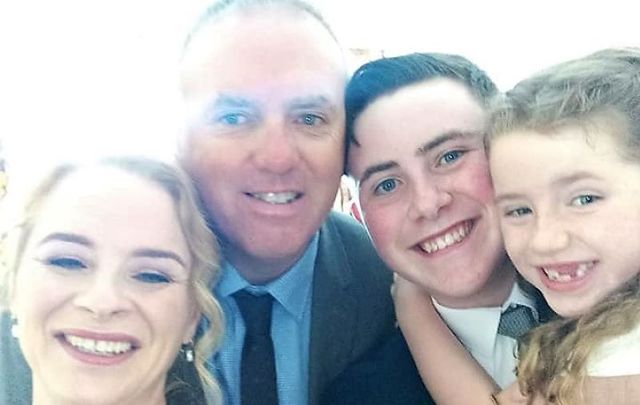 Geraldine Mullan addressed the mourners at her husband and children's funeral on August 24 in Moville, Co Donegal

The funeral for John Mullan and his two children Tómas and Amelia was held on Monday, August 24 in  Moville, Co Donegal after they were tragically killed in a road accident near Quigley’s Point in Co Donegal on August 20.

According to An Garda Síochána, the Mullan family was traveling by car from Muff towards Quigley’s Point when the driver, 49-year-old John Mullan, lost control of the vehicle at around 10:30 pm. The car skidded across the road and down the embankment before plunging into the water at Lough Foyle.

John Mullan and his two children, Tómas, 14, and Amelia, 6, were fatally injured in the accident. Geraldine Mullan, John’s wife, managed to escape and was transported to Letterkenny Hospital where she was treated for non-life-threatening injuries.

The following day, Garda Superintendent Eugene McGovern of Buncrana Garda Station, who was at the scene of the incident, said: "We knew fairly early on that we were dealing with a family situation here and it was very difficult.

"We still don't know what caused Mr. Mullan to veer off the road but we will carry out a full investigation into all the circumstances.

"It was a wet and windy night and the stretch of road where the crash happened had recently been resurfaced so that will form part of our investigation," McGovern said.

He added: "It is just difficult to find words for the families involved. Mr. and Mrs. Mullan's families have been informed of the situation and that is why we are now releasing their names.

"This is an awful tragedy for the immediate families but also for the wider community as the family are well known and respected in the locality," he said.

On Monday, hundreds of people lined the roads leading to the funeral for John, Tómas, and Amelia Mullan at St. Pius X Church in Moville, Co Donegal. Due to coronavirus restrictions, only about 50 people were permitted inside the church.

Speaking to mourners at the funeral, Geraldine Mullan said: "Go home and hug and kiss your loved ones and tell them how much they mean to you. John did that every morning for me and he will do it again when we are together again."

Reflecting on the terrible accident, Geraldine said: "Everything was against us. There was a high tide, water on the road, roadworks and slippery road conditions.

"John was the safest of drivers. There was no speed or no reckless driving,” she said.

"I have no answers, but I can picture that night, second by second. In seconds, our lives changed completely. At 9:30 pm on Thursday, August 20, my life was irrevocably changed for the worst.

"We landed upside down in the water and my dear husband could not get out and was pinned in due to his injuries."

Geraldine added: "Everyone knew Tomás was the perfect big brother and, when the divers found him, he had his arms wrapped around his little sister."

After the funeral mass, the three coffins carrying John, Tomás, and Amelia were brought to the nearby Ballybrack Cemetery in Greencastle for burial.