Michael Butler died of pneumonia last week at the age of 81. 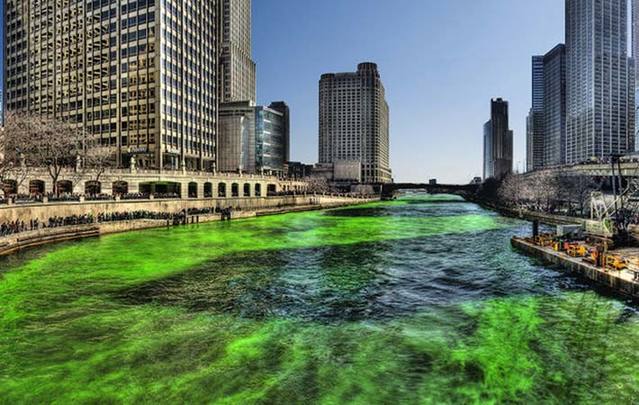 A little bit of Irish American history passed forever last week. Mike Butler, the man who in 1962 started the annual St. Patrick's Day tradition of dyeing the Chicago River green, has died at the age of 81 of pneumonia. Butler was a proud first-generation Irish American, with his mother from Co. Tipperary, and his father from Co. Kerry.

Just as dyeing the river was a Chicago St.Patrick's Day tradition so was the annual speculation about how it was done and who was responsible for it. One extraordinary aspect of the dyeing, one that few knew, was that it took orange dye to make it all work.

An obituary by Maureen O'Donnell of the Chicago Sun Times lovingly chronicles Butler's life and how he and his family, along with another family of volunteers, the Rowans, have turned the Chicago River green every St Patrick’s Day for more than half a century.

“It’s special,” O'Donnell quotes Butler as having once said of the tradition. “We’re the only city in the United States that does it. Nobody has been able to quite duplicate it. Other cities have tried. Maybe they get a little color in, but they never succeed the way we get the Chicago River.”

He added: “We never let anybody else know exactly what we do beforehand and during the process to get a completely green, Irish river.”

O'Donnell spoke with his family about the method:

“'He was very, very secretive about the dye,' said his daughter, Kathleen Unes.

After he’d pick up the powder each year, 'It was hidden in the garage,' she said.

The Rowans know the source of the nontoxic powder, Tom Rowan told her.

Read more: Mesmerizing sequence of photos of the dyeing of the Chicago River for Paddy’s Day

“We always refer to it as ‘leprechaun dust,’ ” Rowan said. “We have never told anybody what it is.”

O'Donnell continues on to explain that:

"Chicago’s river-dyeing tradition began in 1962, though its genesis is a bit murky. Most versions lead back to the sponsor of the St. Patrick’s Day parade — the Chicago Journeymen Plumbers union.

A light-bulb moment happened when somebody spotted a plumber splashed with green stains from a substance used to check for leaks, she said.

The Rowans and Butlers figured out the best way to distribute the dyeing powder — which is orange — was by shaking it through old-fashioned flour-sifters. Then came the next step, a second boat — “the ‘Mixmaster,’ ” according to Marlene Butler. When churned with water, the orange dye turns the water a phosphorescent green."

Mike Butler is survived by his wife, daughters and 14 grandchildren. Click through to the Sun Times obituary to read more about his life and legacy, including a trip to Dublin to dye the Liffey green in 1998, when the orange powder sparked consternation among spectators who thought it was a Protestant St. Patrick's Day protest.