The background was English, the outfit and the music were Scottish but at least the actor had red hair. 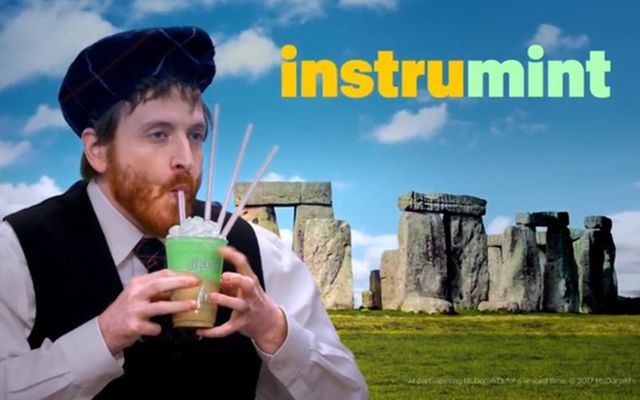 The background was English, the outfit and the music were Scottish but at least the actor had red hair. McDonalds/Twitter

McDonald’s have canceled and apologized for an advertisement released for St Patrick’s Day that used distinctively British themes.

The ten-second clip - now deleted - was meant to promote the company’s ‘Shamrock Shake’. The advert showed a ginger man dressed in Scottish tartan with Stonehenge in England as the background. Accompanied by the bagpipes, sheep can also be seen at times.

The advertisement was pilloried on Twitter and angrily denounced by Irish Americans as insensitive.

@McDonalds The music is Scottish pipes & the scene is Stonehenge in England. Maybe try again with Irish Uilleann pipes & an Irish setting??☘

@McDonalds what kind of abomination is that advert? It's an insult to Irish people everywhere

While there is an extremely strong piping tradition in Ireland and many bagpipe players and bands, the instrument is not considered a traditional Irish musical instrument in the same way that the uilleann pipes would be. While the inclusion of the bagpipes could be forgiven, for this reason, the use of Stonehenge as an Irish landmark is inaccurate and was criticized by Irish groups in the US.

After a complaint from the Ancient Order of Hibernians (AOH) the fast food chain has issued an apology. Neil Cosgrave wrote to the organization detailing his, “extreme disappointment in the lack of knowledge and respect” in the advertisement.

“Instead,” he suggested, “of promoting ‘Shamrock Season’ McDonalds [should] instead consider supporting ‘Irish American  Heritage Month’, proclaimed each March for 27 years by American Presidents of both parties and highlight the many well documented contributions of the Irish and Irish-Americans  as you have done commendably for other Heritage Months.”

The company apologized and Robert Gibbs, Executive Vice President for Corporate Relations (who previously served as press secretary for President Obama), wrote to the AOH informing them, “That piece of content was not representative of McDonald’s or its values and we apologize for it.

“As a result, we moved quickly last Friday to take it down and also issued a public apology.

“Please know that McDonald’s is strongly supportive of Ireland and respectful of its culture. Our restaurants are a major purchaser of Irish beef and produce. We also support farmers in Ireland through programs like Farm Forward, which encourages the sustainable future of Irish farming.”