Meghan, Duchess of Sussex praised former President of Ireland Mary Robinson in her opening remarks at the One Young World Summit in Manchester. 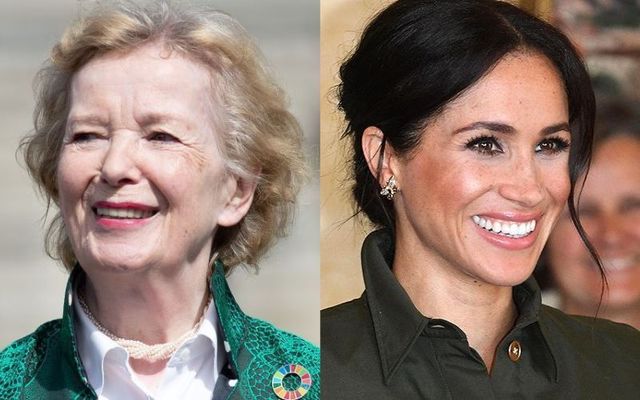 Mary Robinson is “one of the people I admire most," Meghan, Duchess of Sussex said during her speech at the opening ceremonies of the One Young World Summit in Manchester yesterday, September 5.

Meghan, Duchess of Sussex was speaking after Robinson, a fellow One Young World counsellor and the first female President of Ireland, spoke during Monday night's opening ceremonies.

In her speech, Meghan said that in 2016: "I was very lucky to receive a day off from filming, specifically to take a quick flight from Toronto up to Ottawa and to be able to join this work again for One Young World - being with some people I admire most, including former President of Ireland Mary Robinson, who you heard from earlier."

Earlier in her remarks, Meghan reminisced about how she was first invited to be a counselor for One Young World in 2014 when the summit was held in Dublin.

Robinson, who became Ireland's first female President in 1990 and is now the chair of the UN Elders as well as a fierce advocate for climate action, is also a counselor at One Young World.

During her remarks at the opening ceremonies on Monday, Robinson spoke about "the importance of leadership in a challenging world" during Monday's opening ceremony.

She said: "I am part of a growing network of networks of women leadrers who asked ourselves, 'What if our best world is still ahead of us?'

"It is. A world without the fumes of fossil fuel. It will be healtheir, with green cities full of parks, and gardens, and even farms. The countryside will be restored and rewilded. Everyone will have access to clean energy and the clean jobs that go with it.

"We can choose that best world. Otherwise, we face a worsening world that we cannot now ignore."

Mary Robinson, Chair of @TheElders, gave a powerful speech on the importance of leadership in a challenging world and shared a message of hope for all upcoming young leaders at the #OYWOpeningCeremony tonight.

'What if our best world is still ahead of us? It is.' 🌻 pic.twitter.com/D6deEIMyRs

The 2023 One Young World Summit will be held in Belfast, Northern Ireland.