McAleese is demanding answers after an inquiry showed the founder of the L'Arche Community engaged in sexual misconduct for decades. 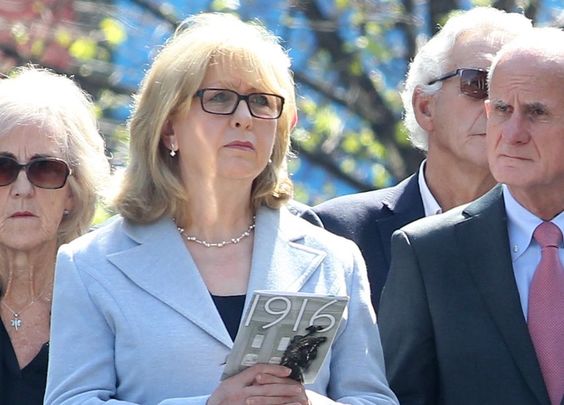 Former President Mary McAleese, pictured here in 2016, is demanding answers from The Vatican after the Jean Vanier - L'Arche scandal. RollingNews.ie

Former President of Ireland Mary McAleese has penned a letter to Pope Francis in which she threatens to leave the Catholic Church “if it transpires that the Holy See failed to act to protect members of the L’Arche Community.”

The L’Arche Community was founded in 1964 by Jean Vanier, who died in May 2019, to assist people with intellectual disabilities. It assists some 10,000 people across 39 countries, including four locations in Ireland.

Last year, an inquiry was launched by L’Arche International and carried out by independent UK consultancy firm GCPS.

In its findings, delivered in February, the report said that six adult women without disabilities provided "credible and consistent testimonies" that indicated "Jean Vanier initiated sexual relations with them, usually in the context of spiritual accompaniment" between 1970 and 2005.

The inquiry additionally found that Vanier lied about his relationship with the disgraced Father Thomas Philippe.

McAleese previously held Vanier in high regard. In a 2014 piece for The Tablet, she wrote: “I can think of no better exemplar of the Catholic faith, lived and witnessed in joy, than Jean Vanier. He is 86 now and still teaching us to look to the fragile if we want to know our own strength, to the overlooked if we want to experience love.”

In a statement issued after the inquiry’s findings, L’Arche International said: “At least a decade before the founding of L’Arche, Jean Vanier was made aware of the fact that Father Thomas Philippe, his spiritual director, had emotionally and sexually abused adult women without disabilities. This abuse happened in the context of Philippe’s spiritual direction in 1951/1952.

“It is common knowledge that Philippe was banned from exercising any public or private ministry in a trial conducted by the Catholic Church in 1956. Jean Vanier repeatedly and publicly stated that he did not know why Philippe was convicted. We now know that Jean Vanier lied. He was aware of his mentor’s behaviors.

“More so, as a member of a group of followers of Philippe, starting in the 1950s, Jean Vanier not only subscribed to Philippe’s theology, which the Catholic Church deemed heretical. He also shared sexual practices, similar to those of Philippe, with several women. The inquiry found no evidence that these specific relationships were not consensual. It is clear that Jean Vanier enabled Philippe to be involved in the L’Arche community in Trosly until his death in 1993, and thus potentially failed to prevent further abuse.

“In 2015, the Catholic Church convicted Philippe a second time for 14 cases of emotional and sexual abuse of adult women without a disability in the 1970s and 1980s. Jean Vanier had heard from some of the survivors but dismissed the pain and suffering of the women who confided in him. He did not pursue or report these allegations of sexual abuse. Jean Vanier was thus complicit in covering up Philippe’s abuse.

“Lastly, the inquiry reveals that Jean Vanier himself has been accused of manipulative sexual relationships and emotional abuse between 1970 and 2005, usually within a relational context where he exercised significant power and a psychological hold over the alleged victims. These allegations have been brought forward by six courageous adult women. None of them had an intellectual disability. The inquiry has found the allegations to be credible. Independently from one another, the witnesses describe similar occurrences, which had a long-lasting and negative impact on their personal lives and subsequent relationships.”

McAleese now says she is devastated by the inquiry’s findings: “Hearing last week the awful story of his sexually and spiritually abusive conduct was devastating. Even worse was learning that the Holy See had been aware since the 1950s of his malevolent proclivities and those of his colleague Pere Thomas Phillippe. ”

In her letter to Pope Francis, reported upon by The Tablet and The Irish Times, McAleese writes: “I urge you to ensure it is dealt with as openly, courageously and honestly as L’Arche dealt with the investigation into its founder. L’Arche will learn from this, but will the Holy See?”

While McAleese believes L’Arche can recover from the scandal thanks to “its own integrity which is more than capable of transcending the Vanier betrayal”, she continues: “I am not so sure about whether trust in the Holy See will recover so easily.”

“Many times in recent years I have had reason to despair at the failures at papal, episcopal and Curial level regarding the protection of vulnerable children and the vindication of victims,” McAleese wrote.

“It is essential that the Holy See now explains how it came to so publicly commend a man whose predatory proclivities it was aware of. What steps if any did the Holy See take to interrupt the growth of the powerful cult of Vanier by warning the many good men and women who trusted him in good faith that he had an alarming past?

“Now that both Philippe and Vanier have been unmasked the spotlight moves to the Holy See. What did it know and when and what did it do to prevent Vanier and Philippe living their grand lie? What did it do or not do which allowed Vanier to grow into the uncontested legend of folk saint and icon, a reputation which must have made it so very difficult for victims to come forward?

“If however, it transpires that the Holy See failed to act to protect members of the L’Arche community by alerting them to the known predatory activities of Vanier and Philippe I have to say that this will be my final line of least resistance.”

“I could not in conscience continue to support an institution capable of such gross negligence.”