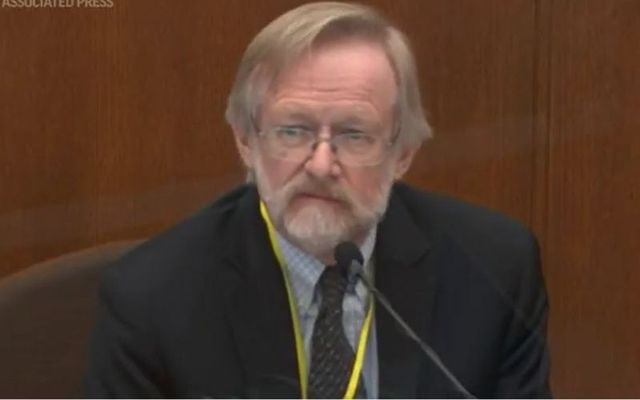 Dr. Martin Tobin, an Irish pulmonologist and physician, was recalled today to the Derek Chauvin trial by prosecutor Jerry Blackwell to rebut the testimony of Dr. David Fowler, a defense medical expert witness.

Dr. Martin Tobin, a native of Co Kilkenny now based in the Chicago area, was briefly recalled by the prosecution today, April 15, to "knock down” defense witness Dr. David Fowler's theory that carbon monoxide poisoning from a squad car’s exhaust might have contributed to George Floyd’s death, the Associated Press reports.

On Wednesday, Dr. Fowler testified that the fentanyl and methamphetamine in Floyd’s system, and possibly carbon monoxide poisoning, were contributing factors in Floyd's death.

Noting that Floyd was found to have an oxygen saturation of 98 percent, Blackwell asked Dr. Tobin if that tells us anything about what the carbon monoxide content could have been.

Dr. Tobin said: "If hemoglobin is saturated at 98 percent, it tells you all there was for everything else is two percent, so the maximum amount of carbon monoxide would be two percent."

Blackwell said: "So in other words, as to the statement that his [Floyd's] carboxyhemoglobin could have increased by 10 to 18 percent, in your view, that's not possible?"

"It's simply wrong," Dr. Tobin said, adding that Floyd's level was at most 2 percent, which is "normal."

Dr. Tobin, who is a pulmonary and critical care medicine physician and professor based at Loyola University Medical Center in Illinois, was educated at University College Dublin and did his residency through Trinity College Hospitals in Ireland.

Prior to Dr. Tobin being recalled, the defense rested its case on Thursday. Derek Chauvin invoked his fifth amendment right to not testify,

Closing arguments in the Derek Chauvin trial are set to begin Monday, April 19. Afterward, the jury will begin its deliberations.

George Floyd, a Black man, died during an arrest on May 25, 2020, in Minneapolis, Minnesota in the US. The police were summoned after Floyd was accused of trying to use a counterfeit $20 bill. During the arrest, Officer Derek Chauvin kneeled on the back of Floyd's neck for more than nine minutes. Floyd's death spurred international protests against police brutality. 45-year-old Chauvin is facing charges of murder and manslaughter.